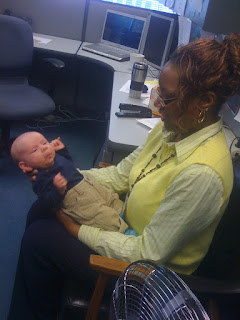 Today Nick is four weeks old!! We cannot believe it's been four weeks since he was born. He is very strong - he holds his head up a lot. He hasn't genuinely smiled yet - we are eagerly awaiting that! We are sure his smile will be beautiful based on the faux smiles he gives us when he's gassy :)

This week was a little traumatic. On Monday, Nick threw up four times and I freaked out. We called his doctor and the nurse said to feed him smaller amounts more frequently to see if that helped and scheduled an appointment for us Tuesday morning. I was really afraid Nick had a condition called pyloric stenosis - a rare condition (but one that occurs most frequently in first born Caucasian males) where the bottom of the stomach closes, and which requires surgery (although a simple surgery) to repair. Silly Internet, allowing me to self-diagnose :P We went to the doctor Tuesday and Nick weighed 9 lbs 10 oz (9 oz more than Friday - a very good sign!) and then the doctor checked him out. He felt for the "olive" - a small mass that can be felt in the groin area of babies with PS - but didn't feel it. Because of the circumstances, though, he wanted to rule out PS and he asked me to take Nick to the emergency room at St. Joe's in Ann Arbor for an upper GI. So I took Nick there and Jeff met us there. They did an ultrasound, which was negative, so it appears as though Nick just has GER - baby acid reflux. I have been feeding him smaller amounts more frequently since Monday night and he hasn't thrown up at all. Hopefully we can control it without having to resort to medication (Zantac or Prevacid). It was very scary to think my little three and a half week old baby might need surgery. I sat in the ER waiting room crying, thinking about all the moms and dads who have to sit through worse things with their little children, like cancer. It was such a relief when the ultrasound was negative!

The rest of the week has been fine - no more throwing up! Just a little bit of spit-up. Wednesday and Thursday we laid low at the house, because of the incessant rain and because I was still worried about him and didn't want to overexcite him. Wednesday evening Audrey and Norm came over for dinner and to meet Nick. He loved them and I hope they loved him too! Friday we met Jeff at his office for lunch, and Nick got to meet Jeff's co-workers. He was adorable and everyone loved him! Then I took him to 12 Oaks for the first time. I nursed him in the (empty) food court. I'm working my way up to public nursing!!

We rescheduled Nick's photo shoot for this week. I am also going into the office one day this week, so Nick will be home all day with Dad instead of Mom. We'll see how that goes! Four more weeks until I'm back to work full-time!
Posted by tejl at 9:13 PM

I'm glad he's doing better!! Are you having Dionne take the photos?