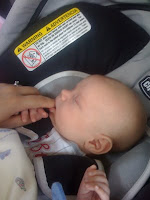 Today Nick is eight weeks old! He had his two month well-baby visit. The good (great!) news is he weighs 12 lbs. 3 oz (75th %) and is 22 3/4 inches long (50th %). His doctor said he is growing perfectly and continues to be amazed that Nick is exclusively breastfed. The bad news - he had five shots :( Two nurses did them, so he had two at once, two at once, then a fifth on its own. They also tried to give him an oral vaccine - he wasn't having any of that, he spit it right out. Apparently he only likes breastmilk :) Nick was so brave. He cried for less than five minutes after the shots. And miraculously, mom didn't cry at all! :) The doctor said Nick is doing great physically, however, he does still go cross-eyed sometimes, so we need to take him to a pediatric ophthalmologist to have it monitored. Hopefully it will correct itself. He also said Nick's drooling and chewing are not related to future teething - it's related to him getting ready to be spoon fed! That's at least four months away though :)

Last weekend we took Nick to Pentwater. He did great! He only cried when he was hungry or needed to be burped. We arrived in Pentwater just before the shower started. 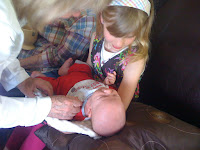 The shower was so much fun! Jeff's Aunt Cherrie and Aunt Nancy did a fantastic job! We played a fun game where they put ten baby items in brown paper bags and we all had to guess what they were by feeling them through the bag. Jeff and I only got three or four right - but in our defense, we aren't using a lot of the items we didn't guess correctly :) 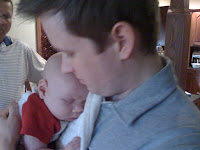 Lots of relatives were able to hold Nick for the first time, including Lesleigh, pictured here - Jeff's cousin's daughter :) We received a lot of great gifts, including the first contribution to Nick's college fund - everyone was so generous. He received his first pair of Robeez from Aunt Cherrie and Uncle Ralph, a great adjustable size sun hat with built-in sunscreen from Aunt Nancy and Amy, tons of adorable clothes from the Petersens, a gorgeous hand-knit sweater, hat and booties with matching afghan and a UM polo onesie and hand-knit UM hat from Great Grandma Lundberg, fantastic foot rattles from Staci - just to name a few :) 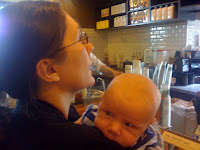 On the way home Nick made his first trip to Starbucks! He declined to order anything, he just looked all around and waited patiently for mom and dad to get their drinks. We promised him someday he'll love their hot chocolate, and we'll buy him his own travel mug. 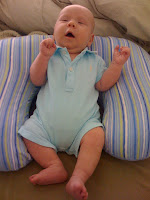 Monday was pretty laid back. Dad and grandpa fixed a sprinkler and tried to fix the fridge while mom and Nick went shopping. Nick wore Polo for the first time, pictured here. Then dad made a delicious marinade and grilled some chicken. Tuesday morning, before dad left for work, Nick SMILED for the first time! So happily dad was able to see it :) He smiled three more times that day! Tuesday night mom and Nick went to their first NAMI moms' night out at an organic coffee shop called First Cup in Redford. Everyone thought Nick was adorable, and said he is so alert for his age! Wednesday mom and Nick went to the Secretary of State office in Canton to renew mom's license plate tab, then shopping to try to find dad a birthday gift from Nick. Eventually we found exactly what we were looking for, and along the way, picked up a few things for mom and Nick too :) Thursday mom and dad decided to do a morning trial run, so mom got dressed pretty early, and decided not to waste the day. Mom and Nick went to the Northville farmers' market and bought some tomato and peppet plants, and basil and flat leaf parsley plants. Then we went to Twelve Oaks and bought Aunt Krystyn's birthday present and some Carter's creepers for Nick. Mom nursed Nick twice at the mall! Nursing in public is getting easier bit by bit :) Nick mostly slept, in the Moby or the car seat, pictured here - so adorable!! Thursday night dad held Nick in the Ergo carrier while mom planted her plants, then made ground turkey spaghetti for dinner. 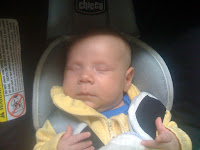 This morning was supposed to be a test run to daycare, but Nick and mom didn't leave until 8:30 - over an hour late :( We went to daycare anyway, paid Nick's first month's tuition, and hung out for a little while in the infant room with Miss Melissa. Then we headed off to Target, where Nick slept and mom bought some things for daycare and her return to work. Then it was off to the doctor's office! 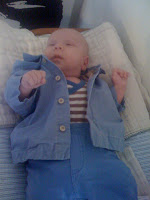 Tomorrow afternoon we have our first family portrait session scheduled. Then mom and dad are going out to Boodles with dad's family for dad's birthday while Lauren baby-sits Nick - his very first time without mom or dad around! And of course, Nick starts daycare full time on Monday and mom goes back to the office. No plans for the evenings next week except cuddling :) Thursday is Jeff's birthday, which the three of us will celebrate at home together. Next weekend dad and Nick will have some time to themselves when mom goes to an LAA breakfast meeting.

It is starting to sink in - this is the life Jeff and I have dreamed of and worked towards for over eight years now, and it's finally starting to feel real. We have a great marriage, we bought our dream house, and now we have our own family with our amazing little boy. I honestly couldn't be happier! Well, maybe if I lost these last few pregnancy pounds ;)
Posted by tejl at 3:14 PM

Don't worry about those pregnancy pounds . . . they are your mom trophy!