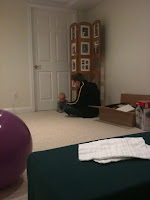 Today Nick is forty-seven weeks old! I remember when he was seven weeks old . . . that was when we saw his first real smiles :) Now he smiles all the time, laughs, crawls, babbles . . . it's amazing!

Last weekend was a whirlwind. Saturday we went out to Lake Orion to drop off donor milk. We visited with the family a little while, then headed over to Great Lakes Crossing to do a bit of shopping and eat some lunch. I had a chicken Greek salad, which Nick enjoyed sharing with me. After we got home, Jeff's parents invited us to go out to dinner with them before Jeff, Jim and their parents went to the UM hockey game. We just went up to Red Olive (formerly Honeytree) and Nick again shared a salad with me. He's such a cutie - Jim ordered saganaki and Nick's eyes got so wide at the flame!

Sunday I wasn't feeling well, so I mostly laid around with Nick until it was time to head out. Jeff took care of some business while Nick napped in the car, then we went to Boodles for Uncle Jim's birthday dinner. Everyone oohed and aahed over Nick. He did ok - I felt terrible, because Boodles in not a 20 minute meal, and he is so active now it felt like I was torturing him trying to get him to sit in a high chair. Jeff and I took turns holding him and I took him out to the car for a little while but what he really wanted to do was crawl around :( Needless to say it will be at least a few years before we try to take him anywhere that is longer than 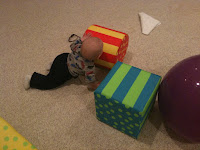 Monday it was back to work and daycare. This week a miracle happened - Nick took two hour naps almost every day at daycare! In the crib! He seemed to eat a lot of solids this week too, while still drinking most of his bottles - I think the weaning part of baby-led weaning is starting to kick in! I need to keep researching foods to send with him. Right now I send mostly snack foods but I need to start sending meals :) Tuesday Jeff had a dentist appointment, so I picked Nick up from daycare - which never goes well. As soon as he sees me he just wants to nurse :( Thursday I stopped at the grocery store on the way home because Nick was out of bananas. I bought him some delicious blueberries and still made it home by 6:30.

Tonight I didn't get home u 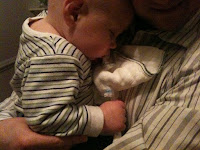 ntil almost 7 - late day at the office. When I arrived, Jeff was walking Nick around the great room, as Nick hugged his toothbrush and slept on Jeff's shoulder. It was the most adorable thing I've seen in quite some time! Well, at least since the last adorable thing Nick did :)

Today I bought Nick a ball pit - I am so excited for him to play in it tomorrow! I hope he likes it!

This weekend should be fun. I'm thinking about making blueberry pancakes in the morning - I'll have to find a sugar free, dairy free, whole wheat recipe but I'm sure they're out there. Then we have some shopping to do before we head out to A2 for a Connection Parenting potluck. We are so excited to see our CP friends! It's been too long. Sunday we are going to Ikea to look at and possibly purchase some shelves for the basement. We need to get our basement organized before Nick's party! Which is only 6 weeks away :)
Posted by tejl at 11:56 AM