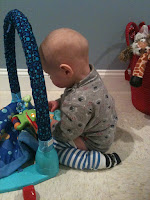 Today Nick is forty-four weeks old! He is back to his normal self, thank goodness! Happy and smiling and growing. This week was a week of transition - transitioning from Infant A to Infant B at daycare!

Last weekend we had so much fun. On Saturday, after Nick's morning nap, we wandered into downtown Northville. We went to Baby Bliss to buy a baby shower gift, the Livingston Co-Op in the public market to check it out, Northville Chill-E Cook-Off (Rocky's of Northville won!), and to Baby Baby to look for an umbrella stroller. Nick had so much fun! He hung out in the Moby, saw a lot of people and enjoyed some fresh air as we walked from place to place. He tried some beans and chicken from chili and liked watching the dancing pickle. :)

Sunday we met Grandma Audrey and Papa Norm at Somerset to exchange Christmas gifts and spend some time together. We had so much fun! Nick showed them how he can crawl and cruise and stand up, we ate at t 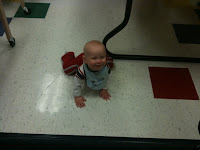 he food court - Nick ate tomatoes and green peppers for the first time - then we walked around the mall and enjoyed the sights and conversation. They gave Nick a great book with moving pictures in it, lots of socks (inside joke) and a cute pink figurine that he has hardly put down since!

Monday was back to work and daycare. It was Nick's first day of transition, but the Infant B teacher was out sick, so Nick stayed in Infant A all day. Tuesday he spent some time in the afternoon in Infant B. Each day he spent a little more time in there, until today - he spent most of the day in Infant B and his new teacher even filled out his daily report! Wednesday Nick turned 10 months old. I cannot believe he's 10 months old!! The time has seriously gone by so fast. Thursday Jeff had to work late so I picked Nick up. It was lightly snowing but that made me late - I didn't get there until a little after 6, and then we stood around talking and we didn't get home until 6:30!

Today Aunt Krystyn is flying in! Nick and dad are going to hang out while I go out to dinner with Aunt Krystyn and Melissa. Tomorrow we have Mel's baby shower while Jeff takes Nick to the UM basketball game with his parents. Sunday we are just hanging out with Aunt Krystyn before she flies home. This week we don't have anything special going on. Nick's transition to Infant B should be complete by the end of the week. Our little boy is growing up!
Posted by tejl at 9:18 AM