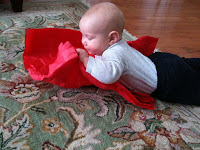 Today Nick is thirty-nine weeks old! It's the first day of his first full calendar year on this planet :) Last year at this time I was just over halfway through my pregnancy. We had already glimpsed Nick's beautiful face at our first 3D ultrasound. And now, just one year later, Nick is mobile and getting so big!

This was a big week for Nick - full of physical developments and holiday fun! And one not-so-great first - his first ear infection :( Christmas night he couldn't sleep, and he was crying so hard - I've never seen him cry like that, and it was the first time I wasn't able to comfort him right away. So we called our next door neighbor, who is in charge of the pediatric ICU at Providence Park Hospital, and she came right over to check him out. She noticed he has a cold, and by that time he was comforted, so she guessed ear infection, and sure enough - she checked both his ears and both ears were red, and one was a little swollen and she couldn't see any "landmarks." She said to give him baby Tylenol every four hours, and she would check on him the next day and if his ears hadn't improved sh 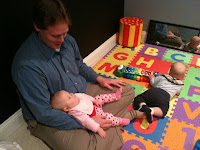 e would prescribe an antibiotic. We gave him a dose of Tylenol at 10 pm and he was finally able to sleep. That night he woke up a few times - two times I was able to nurse him to sleep, and the other time we gave him a second dose of Tylenol. Saturday during the day he seemed fine again! Grammie and Grandpa came over with leftovers and hung out with dad and Nick while I went grocery shopping for Sunday. Saturday night, Nick slept normally again, with no Tylenol. Sunday we had some of our Bradley childbirth classmates over for a get-together. The playroom made its debut and it was a big hit! We had four babies and seven parents, and it didn't feel crowded at all. It was so fun to see the babies playing in there, and nice to catch up with the other parents and talk about babies and families and everything under the sun.

Monday it was back to work and daycare for another short week. Nick was one of only two babies at TLE for the week, so he had lots of one-on-one time with Miss Amanda. Wednesday morning we had a pl 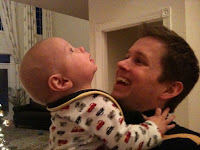 easant surprise - Nick started crawling on his hands and knees, all over the bedroom! We weren't sure if it was just a fluke or not, but when we came home from work that night we set him down on the carpet in the basement and filmed the video I posted that night. He is fast and almost always smiling when he crawls :)

Yesterday we had a New Year's Eve party - we called it Lundbergs' Rockin' New Year's Eve - with Babies! We had a late start to the day. Nick woke up at his usual time, but he was ready for a nap at about 8:45 - so I napped with him and we were both asleep until almost 11! Jeff was working from home, so we took turns getting ready. Nick's friend Emily and her mom Lisa came over to play in the playroom. Unfortunately, Nick went down for his second nap shortly after they arrived. He's definitely not yet at an age where he can stay awake because fun is happening. Lisa and Emily went home and 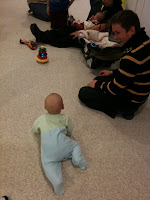 Jeff and I finished getting ready for the party while Nick finished up his nap. Our friends started arriving around 6:30 pm - after Nick was asleep for the night . . . or so we thought! He woke up around 8:30 to nurse and stayed up until almost midnight. We had a blast - there were babies and big kids and adults, all just hanging out and talking and laughing and playing games. At midnight we had a champagne toast and then it was time for everyone to head home.

Today we were supposed to head up to Ludington for Jeff's family Christmas party. We go every year. However, once we hit the road (about 2 hours late), Jeff's dad texted us and said they were expecting 10-15 inches of snow. We were not prepared to sleep over, so we just turned around and went home. We were so disappointed to miss the party - Nick hasn't seen that side of the family since June, when we went up there for a family wedding. We hope we can make it up there soon! We just hung out at home instead. Nick played in the playroom, had some sweet potatoes and banana, and watched part of the Rose Bowl with us.

We hope to take advantage of some sales tomorrow, and buy some things at Ikea for Nick's playroom and buy some LED lights at Home Depot to decorate with next year. Sunday we don't have any plans - but it is the day Nick turns 9 months old! Monday is Nick's 9 month appointment - we are super excited to see how much he weighs and how long he is, but of course we are not excited about more shots. After that, nothing is going on this week. It will be a tough week - our first full week of work and daycare since mid-December!

We planned on teaching Nick sign language but admittedly have not been consistent. Now that he's 9 months old, he's much more likely to pick up our signs, so we are rededicating ourselves to signing with him. We're going to start with milk, sleep and more - the two things that make Nick fussy are being hungry and being tired, so we'd like to help him learn to tell us when he wants to eat or sleep. The point of baby signs is to help your baby communicate with you before they can easily use spoken language - so we're hoping to ease some of Nick's frustration with our ineptitude by teaching him how to "tell" us what he needs!
Posted by tejl at 7:24 PM