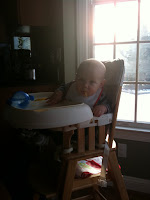 Today Nick is forty weeks old! So any women who became pregnant on Nick's birthday are due today :)

Nick had a great week. He is growing and changing so much. Baby development in the first year is truly amazing.

Last Saturday we attempted to take advantage of some post-Christmas sales. We went to Home Depot and to Ikea. At Ikea we scoped out some things to buy for the playroom as Nick gets older - tents, toys, tables and chairs, a cool chalkboard/dry erase easel with a giant paper roll holder. We ate at the Ikea restaurant - Nick enjoyed some steamed veggies. We also bought him some of these neat smock-type bibs they have - the bibs have full sleeves and a front, but they're open in the back and velcro closed at the top.

Sunday we just hung out at home. Jeff's mom came over to bring us presents from Grandma Lundberg - since we weren't able to go up to Ludington for Lundberg Christmas - and she was able to see Nick crawl. 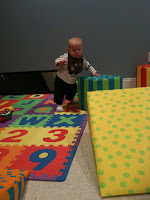 Monday was back to work and daycare for the first full week - and Nick's 9 months appointment. He is 27.5 inches, 20 lbs 2 oz - still at the 50th percentile, which shocked his pediatrician. :) He appears to be developing well (which we didn't need him to tell us, LOL) but he thought his ears still seemed infected so he gave us a prescription for antibiotics. Jeff decided we should give them to Nick. I disagree - since Nick isn't showing signs of pain, I think we should let his ears clear up on their own. But I let Jeff give him the medicine. I just hope it doesn't happen too often - I don't want him to become immune to the antibiotics.

This week Nick's caregivers decided to stop giving him his milk in a bottle, and start giving it to him exclusively in a sippy cup - which is fine with me! :) He had butternut squash, mango, and chicken this week, and also tried rice pasta. I had trouble with the rice pasta - even if it's soft when it's cooked, it gets hard again after it's cool 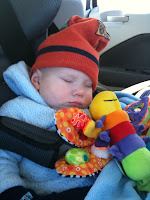 ed. I will need to work around this, as I don't plan on giving him wheat pasta for a while. Wednesday when I dropped him off, I set him down on his tummy on the playmat as usual, turned away to put something down, and when I turned back - he was standing up at the walker! He is getting really good at pulling up and stabilizing himself. He also cruises a little. When I dropped him off yesterday, his caregiver told me he took four steps behind the walker. Last night it took me 2 hours to get home. I expected to get home with Nick in bed and Jeff fried. Instead, they were in the playroom playing! He was perfectly happy and active :) He finally wanted to go to bed around 7:30, so it was nice for me to have some playtime with him too - a rare thing on a week night!

This weekend we don't ha 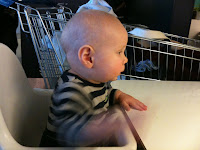 ve any plans. We actually don't have any concrete plans until February 13. :) We are probably going to take some milk out to Lake Orion for a foster baby I donate milk to, and stop at Great Lakes Crossing. We need to get Nick a good snowsuit, or a 12 months coat, or both :) Sunday we are making a family trip to Costco. Nothing exciting this week, either. That's good - we need the calm after the last exciting few weeks!

The playroom is so much fun. We spend almost all of our time down there now. We are looking forward to lots of playdates with Nick's friends. It's a great work in progress! :)
Posted by tejl at 10:35 PM