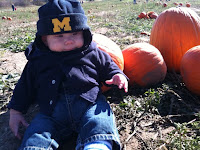 Today Nick is twenty-nine weeks old! He is getting bigger and stronger every day. We can already tell he is independent and determined. If he pushes a toy out of reach, he'll figure out a way to get it back, and if we try to hold something for him, like a teether, he'll take it out of our hands so he can hold it himself. He soooo wants to crawl, but can't quite get his knees up underneath him. It'll happen sooner than we want, that's for sure! What happened to our little newborn??

Last weekend was so fun! Saturday we ran out and ran some errands. Nick had a very tough time in his bucket, so over the weekend we decided to switch to the convertible seats we bought from www.elitecarseats.com - the Sunshin 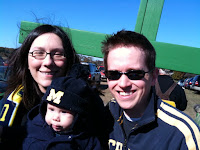 e Kids Radian XT. It rear faces to 35 pounds and will hold Nick until he's 80 pounds! It's black and gray so it looks great in both of our cars. Sunday was a blast - the whole family took Nick to the pumpkin patch at Three Cedars Farm! What a great place. We had cider and doughnuts, and took a hayride out to the pumpkin patch. They have a kitschy general store, a corn maze, a big wooden train for the kids to play on . . . it was so much fun, and it's right in Salem Township, so we hope to make it an annual tradition! Sunday night Jeff installed the new car seats.

Monday was back to work and daycare. 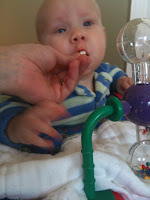 It was Nick's first morning in the new car seat and he LOVED it. He looks so "normal" in the convertible, I can't even picture him in the bucket again! Mondays at daycare are "Start to Art" class - we took in a t-shirt of Jeff's for Nick to use as a smock. It's so fun that he's already working on art projects! So far he made a "stained glass" window and a snake. His everyday caregivers also do art projects with him - like painting paper apples for fall and black cats for Halloween. Tuesday night I had an LAA meeting - Nick didn't do very good without mom :( It seems like as he gets older, he realizes when I'm supposed to be home, and when I don't meet his expectations, he has a hard time. It makes Jeff very sad that he can't comfort Nick when he wants me, but we know this is just while he's so young - someday he'll want just dad dad dad :) Wednesday I was supposed to work on Nick's monkey costume, but instead I fell asleep when Nick did! Thursday was just Nick and mom while dad went to the Pistons game with grandpa.

Today I'm working on Nick's costume for sure! Although I have decided to switch from the faux fur to fleece - that way I can skip the step of making a lining. I originally had fleece picked out at the store but went for the faux fur when I saw it. Joann's doesn't carry very high-quality faux fur anyway - just taking it out of the bag left a bunch of pile on the floor! I am going to have to power through making this costume - I really am a novice sewer. I should have given myself a LOT more time. As long as he has something to wear that I made, I'm happy!

This weekend we don't have any specific plans. We hope to go to Costco and possibly the grocery store. I'll be working on Nick's costume as much as possible. This week we don't have anything exciting planned - but next weekend is Halloween! Yay! Nick's very first Halloween :)
Posted by tejl at 9:21 PM