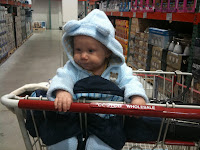 Today Nick is 30 weeks old! Nick had a great week. He received his first development report from daycare - the possible marks are "not evident," "developing," and "evident" - and he got all "evident"s! His first great report card :)

Last weekend we took Nick to Costco on Saturday and he sat in the cart for the very first time! Our cart cover doesn't quite fit the oversized Costco carts, though - so his bottom was cushioned but his hands weren't protected. Sunday I worked on his costume a lot. He played with dad and took some good naps while I sewed away. Around 3 I stopped, we took a nap together, and then we went to buy Nick a jumperoo! He absolutely loves it. He has been trying to bounce in his exersaucer for a while now but it obviously is not made for that. The jumperoo is exactly what he wanted and he loves to bounce bounce bounce :)

Monday was back to 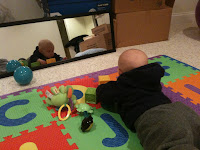 work and daycare. Tuesday at daycare Nick played with - and ate - some canned pumpkin, and apparently, he loved it! I worked some more on his costume that night. Wednesday I almost finished it and he had his final fitting of the suit. Wednesday night Nick didn't wake up to nurse between midnight and 6 am! Thursday I finished the hat and sewed on the tail, and Nick was back to night-nursing. I really don't want him to night wean yet because I think his night nursing is what is keeping my supply steady - if he stops night nursing, he'll only nurse twice or three times Monday-Friday, and I'm concerned that's not enough to keep up my supply.

Today was Nick's Halloween party at daycare. I had to be in court in Shelby Township by 8:15, so Jeff took Nick and his costume to daycare. We couldn't make it to the party, so his Grammie and Grandpa Lundberg went and hung out and took pictures. They had a costume parade and snacks for the visitors. Grammie got to give Nick a bottle, although she said he wasn't too interested in it. Af 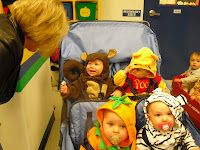 ter daycare, Grammie and Grandpa came back to the house to spend a little more time with Nick, then later on came back with Uncle Jim and brought a pot roast for dinner - can't wait until Nick is old enough to eat dinner with us!

Tomorrow is Nick's first Halloween. During the day we are going to have some more pictures taken by Mod4, then we're stopping by Aunt Cindi's to show off Nick's costume, then we're coming back to the house. Lisa, Donnie and Emily are coming over to hang out and help pass out candy - Emily has a monkey costume too! We can't wait to take pictures of our little monkeys :) We have been told not to expect very many trick-or-treaters - I hope we get a lot, because we bought a lot of candy, and Nick is so adorable, I want people to see him in his costume :)

Sunday is a catch-up day here at the house. We don't have any plans at all. This week should be an easy week too - the first week of November, holy cow! Nick will be seven months on Tuesday. It's so hard to believe we've been parents for seven months already! It's been an amazing seven months - and the best is yet to come :)
Posted by tejl at 9:10 PM