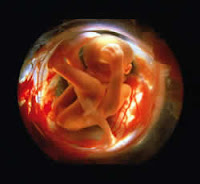 Today Nick is 22 weeks old. Only 126 days to go! He has been very active - I feel him moving at least three or four times a day, usually a couples times each time. I still feel great and I definitely feel lucky to be having such a pleasant, easy pregnancy. My chiropractor said a baby's temperament in the womb is usually similar to his temperament after birth, so I think Nick is going to be an easy-going guy - just like his dad!

According to The Cradle, at the end of this fifth month of pregnancy, my uterus has reached my belly button. The baby in that uterus measures about 7-1/2 inches (191 mm) from crown to rump in length and is about the size of a Barbie or Ken doll. In less than two weeks, the baby has gained more than 3 1/2 ounces (100 g).

According to Pregnancy Weekly, Nick weighs about 15 ounces, measures just under 11 inches head to heel, and is growing eyelashes and eyebrows. Little taste buds are forming on his tongue, and his testes begin descending from his abdomen.

According to Baby Center, at 11 inches (the length of a spaghetti squash) and almost 1 pound, Nick is starting to look like a miniature newborn. His lips, eyelids, and eyebrows are becoming more distinct, and he's even developing tiny tooth buds beneath his gums. His eyes have formed, but his irises (the colored part of the eye) still lack pigment. If we could see inside my womb, we'd be able to spot the fine hair (lanugo) that covers his body and the deep wrinkles on his skin, which he'll sport until he adds a padding of fat to fill them in. Inside his belly, his pancreas — essential for the production of some important hormones — is developing steadily.

According to The Bump, we should watch what we say -- Nick is now able to hear outside noise from down in the womb. Studies show that Nick finds gentle music and my own voice most soothing. Nipples are starting to sprout, and that little face is fully formed. And, Nick's s starting to settle into sleep cycles, snoozing about 12 to 14 hours a day. It shouldn't be hard to figure out when -- I just have to pay attention to those kicks as they start and stop.

We ordered Nick a personalized Christmas stocking. I've been trying to control myself with buying stuff - we are going to buy a dresser this weekend to keep Nick's stuff in, and then maybe I won't be able to control myself at all!! I am looking forward to finishing my pregnancy books, so I can start on the baby books. I already looked up what Nick *should* be doing next Christmas - he'll be about 8 months old. Next Christmas should be really fun!! He won't be able to open his own presents, but he should be sitting up and pulling up to sit up from his tummy, and he may even be cruising! And he'll definitely be able to play with the toys we buy him :)
Posted by tejl at 7:30 AM