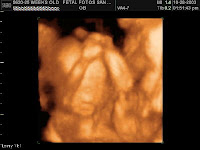 Today Nick is 25 weeks old. Only 105 days to go! We still haven't been able to hear Nick's heartbeat with the stethoscope, but we'll keep trying. He is moving and tumbling around in there a lot - my sister and Jeff have both felt him and seen him move now. I think he is pretty much developed now - he'll just keep getting bigger and his brain will keep growing! Better keep taking my omega-3 supplements!

According to The Cradle, during this month, the buds for Nick’s permanent teeth will come in, high in the gums behind the baby teeth. Nick’s spine will be made up of 33 rings, 150 joints, and 1,000 ligaments, all of which are used to support the body’s weight. All of those structures will begin to form during this month.

According to Pregnancy Weekly, Nick weighs about 1.5 pounds and measures 13.5 inches from head to heel. He is becoming stronger as his stem cells continue to develop into bone tissue, and his bones become solid through a process called ossification.

According to Baby Center, head to heels, Nick now measures about 13 1/2 inches. His weight — a pound and a half — isn't much more than an average rutabaga, but he's beginning to exchange his long, lean look for some baby fat. As he does, his wrinkled skin will begin to smooth out and he'll start to look more and more like a newborn. He's also growing more hair — and if we could see it, we'd now be able to discern its color and texture.

According to The Bump, I should let Jeff put an ear to my belly -- he might be able to pick up Nick's heartbeat (no stethoscope required). Inside the womb, the formation of tiny capillaries is giving Nick a healthy pink glow. Nick is also soaking up my antibodies, getting the immune system ready for life outside the womb. Eyes are forming, and Nick will soon perfect the blink -- perfect for batting those freshly grown lashes.

Tomorrow is our 3D/4D ultrasound and we are so excited!! We will post all of the pictures and the video (if possible) as soon as we get home. It will be our first glimpse of what Nick might look like when he's born! We are so happy to be having a baby now that all of this technology is available. It's difficult to believe our own mothers never saw us on an ultrasound, let alone a 3D/4D ultrasound.
Posted by tejl at 8:07 AM