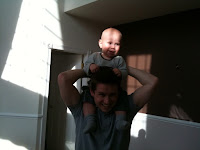 Today Nick is fifty-one weeks old! Only one more week until his birthday. Last year at this time I thought I still had 3 weeks until I became a mom :) We hadn't even properly installed the car seat base in my car or washed Nick's newborn clothes yet! Luckily we got everything together in time :)

Last weekend was a roller coaster. Friday night Nick had a very rough night with dad :( Couldn't sleep without mom. Saturday I tried to make up for it by spending every minute with Nick! We wanted to go to the park but it was a little cooler than we expected. We just played at home, and then after Nick woke up from his second nap we went to Grammie and Grandpa's to celebrate Grandpa's birthday. Nick 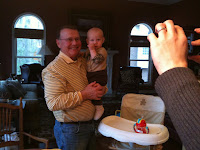 enjoyed his first filet mignon :) And had oranges for dessert. Sunday I headed out to Katie's bridal shower, so Nick and Jeff had some more quality time together :) Nick had a rough time going down for his nap, but he was asleep when I got home around 4. Grandpa came over and we played in the basement for a while. Then Grammie stopped by, but by that time it was Nick's bedtime.

Monday it was back to work and daycare. This week Nick tried salmon for the first time. He loved it! I'm running out of new foods to give him though, LOL Nick seemed especially cheerful this week, very cud 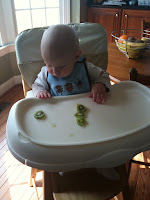 dly and fun. He also slept in his crib for a little bit one night. That's not so easy on me though - I have to lay down with my head at the foot of the bed to nurse him :) Tuesday and Wednesday I had to pick Nick up cause Jeff worked late. It's such an amazing feeling to walk into daycare, where Nick is perfectly happy playing - and then have him look up at me, drop what he's doing and crawl over to me with a huge smile on his face! I hope he's always that happy to see me :)

Tomorrow I am going to try to make it to a big mom2mom sale in Canton. At night Ms. Amanda is coming to baby-sit Nick so we can have a date night. Sunday we're having a playdate with some other little boys around Nick's age. We are working hard to find him some boy friends! All we know are girls :)

This week is a short week for us, because we leave for Raleigh on Thursday - Nick's first plane ride :) We're going to visit Au 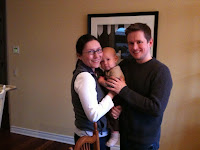 nt Krystyn and Uncle Zack for Nick's first birthday/Easter. Friday we're taking him to a kids museum called Marbles. Saturday we're giving him a little birthday party at Aunt Krystyn and Uncle Zack's house. He has a cute little "birthday boy" onesie and a hand-made "Nick's 1st Birthday" bib that I bought from an Etsy seller - it's so cute :) Sunday is Easter, so we're having a traditional ham dinner. Then we come home Monday.

It's so hard to believe we've been parents for almost a year. It's been both easier and much much harder than we thought it would be! We've loved almost every minute of it though :) Nick is such an amazing little guy. So easy-going, cuddly, friendly, curious, fun, funny . . .We are so proud of ourselves, too. We've stuck with everything we said we would do - cloth diapers, no pacifier, exclusively breastfed, baby-led weaning, no processed foods and no refined sugar, co-sleeping, and babywearing. We don't think this is the only way to raise a happy and healthy child, but this is the way we've chosen to raise our child and we're glad he is happy and healthy :)
Posted by tejl at 10:55 PM