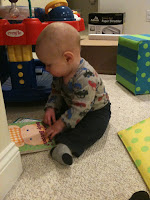 Today Nick is forty-eight weeks old! He is getting so big and he is starting to look like a toddler :) Still not much hair though :)

Last weekend we had a blast! Saturday morning I made whole wheat sugar free blueberry pancakes. I put some fresh blueberries on top for Nick and syrup on top for us. Nick had so much fun and made a big blue mess of himself :) We immediately gave him a bath, and he loves his bath now - splashing around and playing with toys. After he woke up from a nap, we all went to Costco to buy some things we needed for the house and to pick up some dessert for the CP potluck. After Nick's second nap, we went out to Ann Arbor for the potluck. We had such a great time! It was awesome to reconnect with those parents, talk about issues we're having now, and see Nick playing with the other kids. The last time he saw them he wasn't even crawling yet :)

Sunday we made a family trip to Ikea. We needed to get some shelves for Jeff's office and some items to get ready for a potluck we're hosting here soon. We ate lunch at Ikea and we ordered Nick his own 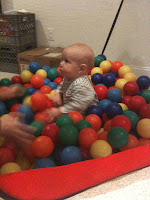 Ikea kids meal. He had organic pasta with organic sauce, steamed vegetables and carrot sticks (which we saved for later, then forgot about and had to throw out). He loved the pasta and he was so adorable eating it!

Monday it was back to work and daycare. This week Nick surprised us by waving bye bye whenever he was about to nurse. It took us until Wednesday to realize he wasn't waving bye, he was signing the milk sign! We are so excited he's picking up the signs :) Wednesday Nick turned 11 months old! I just can't believe it. Wednesday and Thursday Nick stayed up a little later than usual, so we had some play time with him. We took him in the ball pit and let him crawl around the basement. He is so active now! He hates to be cooped up, he likes to be able to crawl around, touch things, look at things. It's so fun to see the house through his eyes! I sent pasta with sauce a couple times this week for Nick's lunch. He is starting to eat three times a day at TLE - morning snack, then lunch, then afternoon snack, like the big kids :)

Tonight he went to s 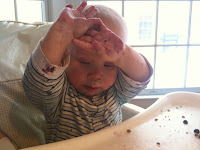 leep as soon as I got home, so I went out to a mom 2 mom sale in Farmington. I bought him some shirts and pants, and two pairs of shoes to wear when he goes outside at daycare. We don't plan on buying him new shoes until he starts walking. These shoes are more for warmth than anything else.

This weekend we are going to be busy! Tomorrow we are going to pick up some Craig's list purchases for Nick. We also plan to make another trip to Costco. We have to print out Nick's birthday party invitations and some supplies for a potluck we're having. Sunday we're having a babywearing meeting at our house - we are so excited to see lots of mamas and babies with their baby carriers! Next week Nick has picture day at TLE again. Hopefully they go better this time! I haven't decided yet what Nick will wear . . .

Well, Nick's birthday will be bittersweet for me. When Nick turns one, I am 'hanging up the horns' - I will stop pumping at work. I don't plan to wean Nick, so he can nurse when we are together, but 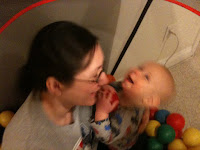 while he's at daycare we're going to have him drink goat milk instead of my milk. I am so excited to not have to lug that pump back and forth to work every day - but it makes me realize how big my baby is getting. I am so proud of myself for pumping for his first year. Lots of people said I wouldn't be able to do it, wouldn't want to do it, would give up after a few months - but they were wrong, and I did my best this year to do what I thought was best for my baby and provide him with my milk even though I wasn't with him all day :)
Posted by tejl at 10:58 PM