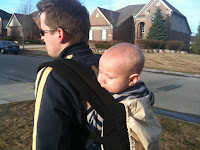 Today Nick is fifty weeks old! Whoa. Only two weeks till his birthday - I remember when he was only two weeks old! I've been spending a lot of time lately looking at his newborn pictures. He was such a little cutie :) Now he's a big cutie!

Last weekend we had a blast! Saturday morning Nick and I hit up some mom2mom sales. We went to the Plymouth moms of multiples sale - my third time going! - and bought Nick a couple toys and some 12 month onesies. Then we went to a big one at Livonia Franklin High - it was big but mostly girl clothes. I only bought him one thing there - a totally adorable UM warm up suit for when he's 18-24 months. Then we came home and Nick took a nice nap while Jeff and I got the house ready for our big potluck, which started at 4. People started arriving right at 4, and we didn't clear the house until just before 8. It was so much fun! Someone counted and we had 68 people! There was tons of great food (and even better desserts!) and everyone seemed to have a blast. We met a lot of new families and saw some of our oldest NAMI friends too. Some of the very first moms I ever met, when Nick was only a couple weeks old, couldn't believe how big he is 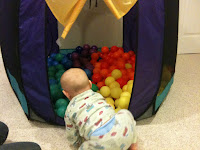 now! We were so glad we were able to host such a great party - but we definitely won't be doing it again anytime soon :)

Sunday we took the day to just relax. We played and napped with Nick all day, and then we went to Trader Joe's real quick to grab groceries for the week.

Monday it was back to work and daycare. This week Nick tried kiwi for the first time - and he loved it! Monday and Tuesday we had such gorgeous weather here. We went for walks right after work with Nick both days - Monday Jeff wore him in the Ergo and Tuesday I wore him in the Moby. Wednesday was St. Patrick's Day! Nick looked very festive in his Carter's holiday clothes. I posted pictures that day :) Thursday Nick had our Wednesday night dinner for lunch - whole wheat pasta shells with sauteed tomatoes and cannellini beans. He did ok with the pasta and beans but he had a hard time with the tomatoes - I guess I have to stick to raw tomatoes or just sauce for now.

Today I am soooo nervous - it's kind of my first night away from Nick! I am going to my friend's bachelorette party and I probably won't be home until 3 or 4 am. I have never not been home before midnight since Nick was born. I'm so nervous about how he's going to do getting back to sleep without me here to nurse him :(

Saturday is a family day. We're just hanging out at home, then we're heading over to grammie and grandpa's to celebrate grandpa's birthday. Sunday is my friend's bridal shower, so I'll leave the house around 10:30, and I won't get home until 3 or 4 - so Nick gets more time with his dad!

We are getting really excited for our trip to Raleigh for Nick's birthday. His first plane trip, his first time out of Michigan, and he gets to see Aunt Krystyn and Uncle Zack again :) 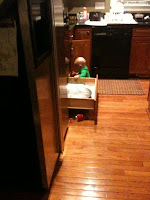 This week Nick found "his" cupboard in the kitchen. It's pretty fun! We put all of his plastic plates and cups and some measuring spoons in there for him. He can go in there, pull everything out, play with it and we don't have to worry about anything breaking or having him hurt himself. This week he also indicated to me when he was done with his bath - the first time he just reached for me, and then last night he reached for me and started climbing out. Wednesday he and Jeff pulled into the garage right before I did. Jeff took him out of his car seat and pointed at me in the car, saying "look there's mommy, do you see mommy over there?" At first he didn't see me, then when he did, he got a HUGE smile on his face and started waving! I melted into a puddle in my car :) It was adorable. He is learning so much, and we can see it - it's very exciting! Pretty soon he'll be running around here and talking :)
Posted by tejl at 6:00 AM