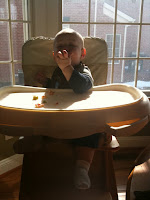 Today Nick is forty-nine weeks old! It seems like he's more and more a little boy every day - where did my baby go??

Last weekend it felt like we were going nonstop! Saturday we headed out after Nick's first nap. We dropped off some coconut milk to a friend, then stopped for lunch at Leo's Coney Island in Dearborn Heights on our way to Dearborn to pick up some Craig's list purchases. Nick sat in a high chair at Leo's and shared my salad with me - while charming all the ladies who passed by :) We went for a quick walk to the nearby Target too, so he could stay out of the car seat for a bit longer. Then we headed to the house to check out the Craig's list purchases. We bought Nick a ton of clothes, including the cutest Polo swim trunks ever, a nylon tunnel and a pool float with a built-in canopy. We were looking at that at Target, since our subdivision has a community pool - at Target it was $17.99 and we bought it for $7.5 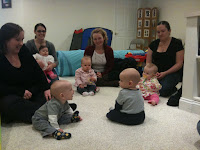 0 :) Then we went to Costco. At Costco we picked up his amazing birthday party invitations that Jeff designed, some paper plates and other items for our potluck, and some shelves for our garage, among other things. Sunday we had a relaxed morning - I made some homemade sugar free whole wheat blueberry waffles, but Nick was not that impressed - I think they were a little too crisp for him. He enjoyed the fresh blueberries I piled on top though :) Later on Sunday afternoon we had a babywearing meeting at our house. It was so fun! Two of our friends from our Bradley class brought their babies, and a bunch of moms from my message board came, and we all hung out, watched the babies play and talked about slings, Ergos, the Moby, etc. It was 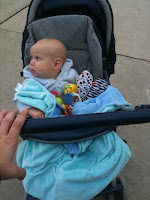 so fun we're doing it again in April :)

Monday it was back to work and daycare. Monday was picture day at TLE. I took Nick a cutie outfit - a plaid shirt and jeans. Turns out lots of parents forgot it was picture day, so after Nick was done with his pictures, the teachers put his outfit on another little baby whose mom forgot an outfit! I think that's so sweet, I can't wait to see the pictures :) Unfortunately the shoes I bought for Nick to wear when he's outside didn't fit him, so I had to buy him some more. Tuesday I met someone at Target to buy a Chicco umbrella stroller and a booster seat for Nick. We were supposed to meet at lunch but he had to reschedule for after work, so I used my lunch hour to find Nick some news shoes. I bought him some size 4 and 5, that way I won't have to buy them again for a few months. This week Nick tried some new foods - oranges and brown rice. Nick loved both! I was nervous about giving him citrus but he ate i 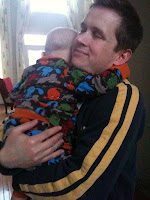 t up. Wednesday I had court in the afternoon, so I came home instead of going back to the office. I picked up Nick's special St. Patrick's Day outfit and the rest of his birthday clothes at the Carter's outlet in Howell, then headed to TLE to pick Nick up. It was such a nice day I took him for a nice long walk in our subdivision - the first walk of the spring :)

Tonight Nick went to bed at his usual 6:30, and we are getting ready to host a big potluck tomorrow - we're expecting about 60 adults and kids! Should be a blast! Sunday we have no plans - just recovering from tomorrow. This week I am going to give Nick another new food - kiwi! I hope he loves it as much as I do.

Nick's newest skills are "blowing" his nose - he'll sit still as we hold a cloth diaper to his nose, then sniff or blow and let us wipe his nose - and blowing kisses - although he often doesn't do the hand part and the nose at the same time. He also reaches for us a lot when he wants a hug or to be picked up - it's so adorable! We are anxiously waiting for those first steps and first words. Could be any day now :)
Posted by tejl at 10:06 PM