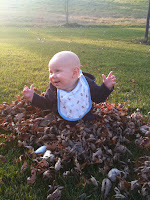 Today Nick is thirty-two weeks old! He is continuing on his baby-led weaning, self-feeding adventure. This week Nick tried green beans and asparagus for the first time. Fresh green beans are really the perfect food for BLW - easy to steam and the perfect size for baby fists!

Last weekend we had a relaxing weekend at home for the most part. Saturday we hung out at home and watched the UM game. After the game, Nick's Grammie and Grandpa stopped by with Great Uncle Pete and Great Aunt Peri. Sunday we went to Costco, bought a few things and enjoyed a pizza lunch, then went to Buy Buy Baby. Nick fell asleep in the car on the way home, but didn't go back to sleep once we arrived. Definitely the biggest downfall of switching to the convertible already - no way to bring him in the house without waking him up. Jeff decided to rake the backyard, so Nick and I went outside to play in the grass and leaf piles. Nick wasn't really sure what to think until we started lightly throwing leaves on him - then he started to have fun!

Monday it was back to work and daycare. This week Nick's daycare had a book fair. It was all set up on Monday but his caregivers didn't know how I could buy books. This week Nick went to sleep pretty early every day - usually by 6:30. I think it must be daylight's saving time. He's up at 5:30 am now 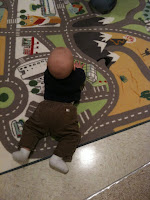 too, instead of his usual 6-6:30. I finally bought books on Thursday - I just picked out what I wanted and left them on the desk for the daycare owner to total up for me. So we didn't pay for them until today - I bought three for Nick and one for his classroom.

Tonight Jeff went to the UM v MSU hockey game with his parents and brother, so they stopped by before the game with pizza and to hang out with Nick. Nick stayed awake for them. He was very active, doing his army crawl and playing with toys. It was a little tough to get him to sleep after all the excitement but it's always fun to see him interacting with his grandparents!

Tomorrow we're going shopping with Nick's friend Emily and Emily's mom. We're hitting up the outlets in Howell - there's a Carter's, Children's Place and Baby Gap outlet there! Sunday we don't have any plans. This week we don't have anything going on either, except Wednesday Nick and dad are on their own because I have an LAA meeting.

We're getting so excited for Thanksgiving. Krystyn and Zack will be here, so we've decided to put the tree up with them the day after Thanksgiving and take them with Nick to see Santa. It will be such a fun family weekend :) Our first Thanksgiving with Nick!
Posted by tejl at 10:21 PM