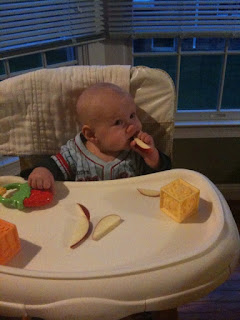 Today Nick is thirty-one weeks old! He is cutting two top teeth - his left front tooth and the next one over. He is drooling and chewing like crazy! He is also enjoying some solid food now - he's tried banana, apple, broccoli, snap peas, mango, pears and sweet potato. So far the pears were the only miss!

Last weekend was Halloween. During the day we went and had some pictures taken by Mod4. After the session, we took Nick to visit Great Grandma Pingle and Aunt Jeanne. They thought he was adorable in his monkey costume! Then we went home, and Nick enjoyed a long nap. Lisa and Donnie and Nick's friend Emily came over to help pass out candy and hang out. Well, we did not need any help - we did not have one single trick-or-treater! We all agreed to take Nick and Emily to Zoo Boo at the Detroit Zoo next year instead - what a disappointing evening. Nick's Grammie and Grandpa live in our same subdivision and they had at least 30-40 kids!

Sunday was daylight's saving time. Nick did not abide by the extra hour of sleep, however! We were up at 5. This threw off his whole day - he took good long naps but at odd times. Jeff and I decided to take Nick to Ikea for something fun to do and to get out of the house. Also, we wanted to check out cribs - we've been talking about getting him a crib, but we still aren't ready to do the nursery, so we thought about getting an inexpensive crib from Ikea for now, until we do a nursery for him. He loves being in busy places like Ikea, with so much to see! We decided to eat at the Ikea restaurant. We put Nick in one of their high chairs and I fed him some of my steamed vegetables - broccoli and snap peas. We gave him a carrot but he wasn't interested in that. We bought him some plastic plates and cups - open-topped cups - both to play with and to help start teaching him to eat from a plate and drink from a normal cup. The cribs at Ikea were

too low to sidecar to our bed, so we decided to go to Buy Buy Baby and look at their cribs. After I nursed Nick in their comfy nursing room, we went to the back to check out their crib selection. We decided on the Status Furniture 400 Richmond Stages 4 in 1 crib in espresso. It will be here in about 12 weeks - sometime in January.

Monday it was back to work and daycare. Tuesday Nick turned 7 months old! We sent mango to daycare with him - and he loved it! We also sent a new sippy cup with Nick - a two handled cup by Nuby. It has a silicone sippy top that is more like a bottle nipple than a traditional sippy cup. Wednesday we sent some pears and those were not a hit. Thursday we sent sweet potatoes and he enjoyed those immensely! Today we sent banana, which he's had and enjoyed before. This week we didn't have very much playtime at home - Nick hasn't been napping well at daycare, too many exciting things to do, so he's been going to sleep around 6:30 at home - just enough time to nurse him and listen to some adorable babbling!

This weekend we have no specific plans, which is nice! We are trying to give Nick plenty of tummy time right now, because he is so close to crawling - we want to give him every chance to keep trying! He loves his new jumperoo too, which is a good way for him to build strong legs for walking in a few months. I am going to cook some asparagus for him, and maybe some squash.

Nothing is happening this week. Hopefully Nick's teeth pop through so he can get some relief until the next ones start coming in. He might be having a growth spurt too - he seems to be sleeping a lot, and deeply. We can't wait to see the pictures we had taken last weekend!!

We are feeding Nick using a process called baby led weaning. We are not giving him purees or cereals. We are giving him finger foods only - we give him fruits and vegetables in match stick pieces that he can feed himself. We can hand him the food but we aren't supposed to put it in his mouth. He has shown us that he is ready for food by picking up the pieces and feeding himself. He isn't digesting the food yet but that's not unusual - he might not digest anything for a few months. We are very excited to share Thanksgiving dinner with him - I'll be careful to set aside a portion of each food before we add any fat to it for Nick. We've already talked about how to set up the dining room - we are going to put our kitchen table at the end of the dining room table so everyone can sit together, with Nick in his high chair at the head of the table!
Posted by tejl at 7:49 PM