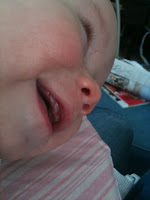 Today Nick is thirty-three weeks old! He is getting to be such a big boy - and by that I mean old, not huge :) He now has six teeth - two on the bottom, four on top. He's got a mean bite too, but we still let him put our fingers in his mouth. What can we say - we're indulgent first-time parents ;)

Last weekend we had fun. Saturday we watched some of the UM v Wisconsin game, but gave up and met Grammie and Grandpa up at the park in our subdivision. Nick had so much fun swinging by himself in the bucket swing, going down the slide with dad, playing in the grass and then going for a short walk in the stroller. Sunday Nick and I met his friend Emily and her mom at the outlets in Howell. What a great outlet center! They have every baby outlet imaginable - Carter's, Osh Kosh, Baby Gap, Children's Place, Gymboree . . .I d 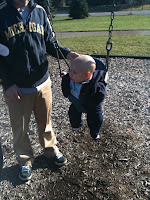 idn't go crazy but I easily could have! Nick sat in a public high chair while I ate lunch. I gave him a little of my grilled chicken to try. He napped in the stroller and finished up his nap in the car on the way home.

Monday it was back to daycare and work for us. Tuesday and Wednesday I picked Nick up from daycare because Jeff was having work done on his car again. It's pretty tough for me to pick him up, because as soon as he sees me he wants to nurse, so he gets pretty fussy when I just put him in the car. Luckily we don't live very far from daycare. Thursday was pajama day, so Nick wore his UM pajamas to daycare. It was so cute to see all the kids - and caregivers! - in their pajamas.

This week Nick decided he'd rather eat his solids than drink his milk. Two days he refused two bottles, and the other two days he ate very little of two bottles, while drinking all of two other bottles. So today I didn't send any solids to see if his milk consumption went back to normal - and it did! I a 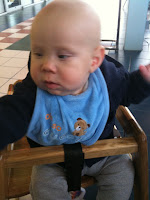 m not sure what to do. I might just let him eat solids on the weekend for now and just send bottles to daycare. He seems to like the solids - but maybe a little too much? Milk should be his main source of nutrition for his first year - so not drinking his milk in favor of eating more solids is just not acceptable yet. And since I'm not there, I don't know exactly what is going on. What I do know is on the weekend he nurses a lot and eats a little bit of solids. But nursing and bottles aren't the same to babies, so it might be different at daycare.

Tomorrow Jeff is going to The Game, and I'll spend a nice day at home with Nick. Nick is so active lately, I feel bad taking him anywhere if he won't be able to be active. The park was nice, a kids' play area would be nice - but I don't want to take him anywhere if he'd be confined to a stroller mostly. He did ok last weekend at the outlets, but I want that to be the exception, not the rule. He can really get around, and loves to play with toys. It's so cute to watch! Sunday we don't have any plans. 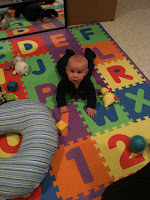 ing. We're hosting Thanksgiving at our house, so sometime after noon Grammie, Grandpa, Uncle Jim and his girlfriend Rachel will come over for dinner. Nick gets to eat with us :) so we'll eat whenever he wakes up from his second nap - sometime between 3 and 5. Friday Nick might spend some time with dad and Uncle Zack while Aunt Krystyn and I hit up a few Black Friday sales, then we're all going to put up the Christmas tree together - Nick's first Christmas tree! Saturday we are going to try to take Nick to see Santa at Somerset - it's by appointment only, so I don't know if it's too late to get in or what. Then Saturday night or Sunday Aunt Krystyn and Uncle Zack are leaving :( We are SO EXCITED for Krystyn and Zack to see Nick - they just saw him two months ago, well, almost three I guess, but he is a totally different baby and we just know they're going to have so much fun!
Posted by tejl at 9:44 PM