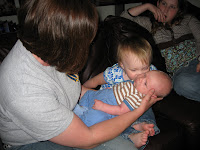 Today Nick is seven weeks old! I can hardly believe it! He had a very exciting weekend and week. This week his new trick was - drumroll please - being put down! He successfully slept on his own in our bed several times for long periods of time, waking up only when hungry. He also had some happy tummy time finally! He is also having some significant gas issues, however - sometimes he cries and cries as we try to burp him and it just takes forever to get him to burp. We feel terrible but we do our best!

Last weekend Bryan, Nicole, Avery and Nicole's sister Sarah stayed with us for the weekend. We had so much fun!! Avery was very gentle with Nick. She kept giving him kisses and petting him and saying "chute baby." It was adorable :) Friday night we just had dinner at the house and hung out. Saturday morning Nicole and I went to a mom to mom sale - it was very small but we both found some good stuff! Then we all went to Ann Arbor. 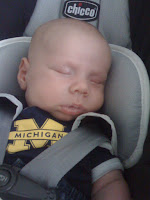 We had lunch at Zingerman's, then went to the MDen. After that, Jeff and I brought Nick home and they continued out to Clawson to visit with other family. 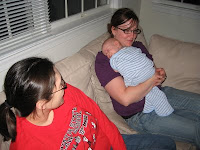 Sunday morning Nicole and I made waffles and bacon, then we all went to Ikea. 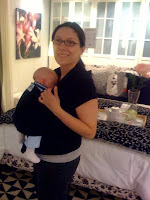 It was Nicole's first time at Ikea and she loved it! After that, they left for Indiana, and we went home.

Monday night I had a meeting at school, so Jeff and Nick were on their own at home. Tuesday night I went to buy additional pump paraphernelia, to Costco to pick up some pictures and to Meijer for groceries. I was gone a little too long, and Nick got very hungry, so Jeff had to deal with a screaming baby while trying to put a bottle together. I really didn't plan to be gone that long but from now on, just in case, we'll always have a bottle ready! Wednesday I went into the office for the full day, and Jeff stayed home with Nick. 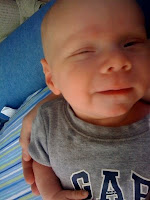 The day went by very fast for me, thank goodness, and wasn't nearly as difficult as I thought it would be - but Jeff did email me pictures all day, and he was home with his dad, not at daycare, so we'll see how I feel June 1. :(
Thursday I gave Nick a bath in the big tub. It went great - he didn't cry at all! Unfortunately he did poop, so that was an adventure. 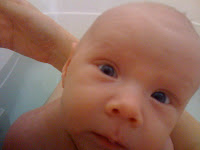 Later in the
afternoon I took him to The Learning Experience for the first time, to meet his "teacher," Miss Melissa, and generally check it out again and become acquainted with everyone. I felt like a terrible mother - Nick will be the only infant in the whole daycare! There is a 3.5 month old who comes one day a week - other than that, all of the kids are at least walking. I just have to get over it, and acknowledge that he will receive excellent care there, while I continue to pursue my career. He will probably be spoiled, being the only infant!! Or maybe I'm just telling myself that to make myself feel better . . . 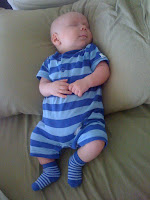 Last night Nick slept on his own in our bed while Jeff and I ate dinner - our very first dinner without Nick since he was born! I kind of missed him, although it was nice to eat with both hands, and Jeff and I are both looking forward to when he's big enough to sit in a high chair at the table with us, even if he won't eat our same dinner for quite some time.

Today we just hung out at home. Nick had a terrible morning with gas, but the afternoon was much better, and he slept peacefully again and enjoyed some tummy time. 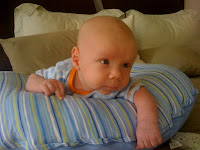 He is very good at holding his head up, although he doesn't hold it steady for very long - he mostly bops it around.

This weekend Nick is venturing up to Ludington to meet more of Jeff's dad's family. Jeff's Aunt Cherrie and Aunt Nancy are generously hosting a shower for us, and we are very excited for Nick to meet everyone. We'll come home sometime Sunday and enjoy the rest of the long weekend. This coming week is my last week of maternity leave. I plan to hold and cuddle Nick as much as possible, and build up my stash of milk as much as possible! His two month appointment is Friday - I can't wait to see how much he weighs, but he will also be getting some shots that day, so it won't be a perfect day. Next weekend we will be celebrating Jeff's 30th birthday - Nick may or may not be with a baby sitter for the very first time! We'll see :)
Posted by tejl at 7:27 PM