Today Nick is five weeks old! Only three more weeks of maternity leave. I am enjoying my time at home with him as much as possible - but I am looking forward to going back to work, too. I am sure once I'm back at work I will wish I was still on leave :) 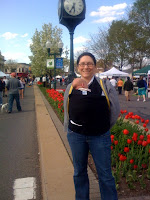 Saturday we took Nick to the Green Street Fair in downtown Plymouth. I carried him in the Moby. We just walked around and looked at all the vendors and ate fajita wraps :) Sunday Nick met Lauren and Jan for the first time. He was adorable, of course, and he wore the onesie Lauren decorated for him at my shower. 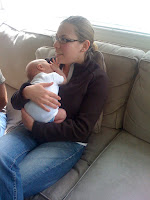 Monday was a lazy hang-out-at-home day. Tuesday was Nick's photo shoot - it went ok. He doesn't like being on his back, so the only pictures that *might* turn out ok are the ones where he is on his tummy - and you can't see his whole face in most of them :( We'll see! Tuesday night I had a Law Alumni Association meeting, so Nick was alone with Jeff for about four hours - the longest yet! Wednesday we took Nick to my office so Jeff could set up my computer to allow me to work from home. Jeff left with Nick around 2:00 pm, and I stayed at the office. 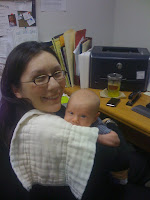 Thursday was a pajama day - for both of us! Today we went to Zingerman's in Ann Arbor, where I enjoyed a delicious sandwich while Nick slept. We began the day with the intention of going to the Breastfeeding Cafe in Ann Arbor, but we left the house so late there was no point, so we went to Zingerman's instead. We came home and did some chores, then we ran out to Laurel Park Place. I used our Snap n' Go stroller for the first time - for the diaper bag :) Nick was in the Moby the whole time.

This weekend is my very first Mother's Day as a mom. My sister sent me small and medium Oxo cookie scoops and three beautiful cards - two of which made me cry - as my first Mother's Day gift from her :) Jeff and I are celebrating with our moms on Saturday so that Sunday can be a day for just our new little family :) So far the only plans are to take pictures of our feet and have Chinese food. I am also taking Nick to my friend Lisa's baby shower on Saturday - Lisa is pregnant with Emily, Nick's future girl BFF :) Next week we don't have anything scheduled except my six week check up with my midwife and Nick's very first La Leche League meeting. Next weekend my cousin Bryan and his family are coming to visit - very exciting! They'll get to meet Nick for the very first time!

We are still waiting to see Nick's first real smile. He holds his head up a lot and I have started giving him some "tummy time." He seems like such a big baby now - he has outgrown some of his newborn clothes and fits into 0-3 sleepers! We unofficially weighed him and he weighs around 10 lbs, give or take a few ounces. He won't "officially" be weighed again until his 2 month check up in a few weeks. He is such an adorable, happy baby - we are so lucky!!
Posted by tejl at 9:31 PM