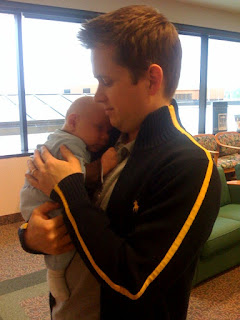 Tonight was my 6 week post-partum visit with my midwife. Jeff and Nick went with me - here's Jeff keeping our cutie boy occupied while we waited. I had to fill out a little survey before I was called in, which had questions about coping, sleep, happiness, etc. I was very honest but I wondered how many women hurt themselves by lying on such surveys? I admit it was a little difficult for me to be honest!

On to my appointment. I've lost almost 28 of the 37 pounds I gained during my pregnancy and my BP was 112/69. My stitches are gone and everything healed nicely. I had a bit of "something" around my cervix but my midwife cleaned it out. My midwife thought Nick was adorable and big and looked a lot different from April 5 - when we left the hospital!

She also gave me some fantastic news - it's been 8 1/2 weeks since Henry Ford West Bloomfield opened and the midwives still have a 0% ("emergency") C-section rate! Ironically, I was apparently the closest patient to a C-section - bad news for me, but amazing news for the midwives! This speaks volumes to the skill and caring ways of the four midwives, in my opinion, and also to the types of women who seek out midwifery care instead of a typical OB-GYN. I cannot speak highly enough of my experience with the midwives and the hospital, and I strongly encourage women in metro Detroit, especially those who are pregnant or trying to conceive, to consider using a Henry Ford midwife, schedule a consultation and check out Henry Ford West Bloomfield!
Posted by tejl at 10:02 PM