As some of you may know, we originally planned to deliver at the Alternative Birthing Center (ABC) at Providence Southfield. Those plans changed, however, when my midwife became a Henry Ford midwife in January, and told me she will now only be delivering at the new hospital, Henry Ford West Bloomfield (HFWB), on Maple Road (15 Mile) between Drake and Halsted, which is scheduled to open to the public March 15. At the time, we thought no big deal, we'll switch too. Our Bradley instructor suggested we tour the ABC anyway, just to check it out, so we did last week. We were very very impressed with our tour, and felt like the ABC was the hospital experience that we want, and suddenly the decision to switch to HFWB was not so cut and dried. The one thing holding us back at the time was I'd have to switch back to my midwife's old practice - I couldn't have my midwife with me at the ABC. We decided to ask some more questions about HFWB and to switch back to the ABC if we didn't like the answers. Yesterday, HFWB held a community open house. I was anxious about going to the open house. I felt very torn after touring the ABC - and basically I felt like my decision was practitioner v. place. After touring HFWB and talking to my midwives about the differences, I have decided to deliver with them at HFWB and feel very confident in my decision! Here are some pictures of the OB wing at HFWB. 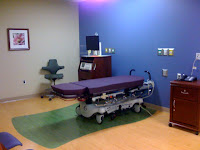 OB Triage - where you check in when you arrive at the hospital and they make sure you're in active labor. 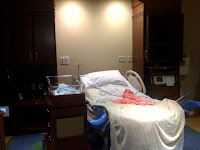 The hospital bed in each Labor Deliver Recovery Postpartum (LDRP) room. It reconfigures like a Transformer into a birthing stool but I forgot to take a picture of it! A mini-fridge will go in each room next to the bed in the cabinets. 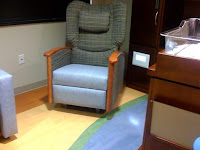 The glider/rocker/recliner in each LDRP room. The arms are contoured to make nursing more comfortable (but I heard one mom who sat in it say it didn't provide enough lumbar support for her). 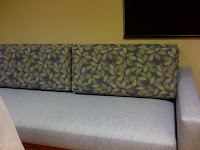 The couch in each LDRP room. The back cushions fold out and linens are added to turn it into a kind of futon for the dads to sleep on. 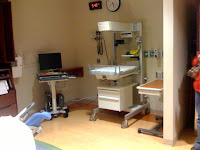 The in-room special baby equipment - only used when necessary. 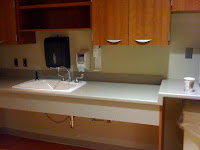 The in-room sink and cabinets - this is where baby's first bath is given. HFWB suggests a bath at 4 hours old, but it can be delayed or even declined. 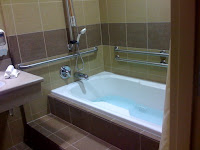 Each LDRP except the handicap-accessible one has a jacuzzi tub in the bathroom. My midwife calls jacuzzis the midwife's epidural - it is supposed to help tremendously during labor, although they don't recommend getting in until you're about 5 cm, otherwise you might get so relaxed your labor might slow down. HFWB will not allow water deliveries, however - just water labor. 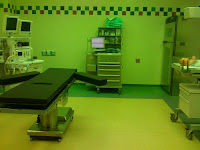 An operating room in case I need a C-Section. The ORs are on the same floor in the same wing - about a three minute gurney trip from any of the LDRPs. The lights are tinted green for a reason but I forgot the reasons the OB told me - because hopefully this was the only time I will ever be in this room!! 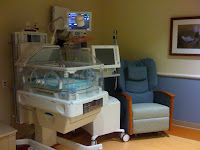 Half of a nursery suite. HFWB does not have a giant nursery with rows and rows of cribs. Babies will mostly stay in the LDRPs with their moms. However, in the event baby needs special care, or for some reason mom wants a break, each baby is brought to a nursery like this - very individual. There are two halves like this connected and the two halves are attended by the same nurse (so two babies to a nurse maximum). There is a recliner and a bench for the parents, so they can be with their baby in the nursery.

I am very excited to finally have made my decision. I feel comfortable with my midwives and confident they will help me have an experience as close to the ABC as I possibly can at HFWB. I am so anxious to go into labor now - I want to put all of my knowledge to use and see how Jeff and I do! Hopefully less than 6 weeks to go!!
Posted by tejl at 8:46 AM

So, can I ask your midwife's name? I just found out that we are expecting #3 in November. I delivered my first (a csection) at St. Joes with OBs. My second was a VBAC with a m/w at St. Joes. However, my midwife has now joined a practice of OBs and that turns me off. I still want a hospital birth and was thinking of HFWB.

My primary midwife's name is Patricia Scane. The other midwives at HFWB are Jan McIntosh, Jen Schuman and Lynn Rife. I don't know Lynn very well yet, but I love Jan and Jen as much as I love Trish! Good luck :)

Hi! Trish delivered my 2nd baby at the ABC in Jan. 07. I am now pregnant with my 3rd and having a hard time finding contact info for her. I do not want to drive to Novi for another Metro Partners midwife when I LOVED Trish so much. Would you please let me know how to get a hold of her? You have made the right choice by learning Bradly method and going with Trish.

Awesome....thank you so much for putting these photos up. We are trying to conceive now, and plan on using Trish and her partners at HFWB.

Thank you for your insight and pictures. I regret delivering my 2 children at Henry Ford Main in Detroit, so I've decided to give HFWB a chance with a midwife. I saw Jen Schuman after my miscarriage and had a good first impression. Now that I am pregnant again and went back to see her, she neglected to read my file and didn't make the best impression. I am thinking because maybe she is preggo herself, but I will give her one more opportunity and send her an email with my concerns and hopefull I will have better results.