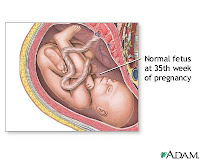 Today Nick is 35 weeks old. Only 35 days to go! Nick's movements are still frequent and strong, and sometimes it feels like he's pushing on a nerve or something - not painful, just a little uncomfortable. I'm still sleeping through the night :) but my pregnancy congestion is still going strong! My next midwife appointment is March 18, when I'll almost be 37 weeks, so I'm not sure if I'll have to go every week after that or if she'll let me wait until 39 weeks.

According to The Cradle, Nick’s arms and legs are looking fuller and more rounded as more fat is deposited under the surface of his skin. Fat deposits increase from about 2 percent at midpregnancy to 12–15 percent at term. In a week or so, the subcutaneous fat will make up about 8 percent of Nick's body weight.

According to Pregnancy Weekly, Nick weighs nearly 5.5 pounds and will continue to gain about half a pound per week until I deliver. He stretches out to 18.5 inches and stem cells in the bone marrow continue to produce red blood cells, white blood cells, and platelets to maintain a healthy immune system, but there is not really any development remaining for arms, legs, brain or organs. Nick will simply continue to add that adorable baby fat as he readies for his big debut.

According to Baby Center, Nick doesn't have much room to maneuver now that he's over 18 inches long and tips the scales at 5 1/4 pounds (pick up a honeydew melon). Because it's so snug in my womb, he isn't likely to be doing somersaults anymore, but the number of times he kicks should remain about the same. His kidneys are fully developed now, and his liver can process some waste products. Most of his basic physical development is now complete — he'll spend the next few weeks putting on weight.

This week we had the week off from our Bradley class. We only have two weeks left of class - and they're review of stage 1 and stage 2 labor, so those lessons are fresh in our minds when we go into labor. :) We also signed up for an infant care class and plan to sign up for an infant CPR class.

We are almost in the home stretch. Neither one of us can believe how fast this pregnancy has gone by! Everyone told us it'll go slow, especially the last trimester, but this last trimester is going by as fast as the first two! We are so anxious to meet Nick for the first time, but we hope he stays in there as long as he needs to. At the same time, we're very concerned about having to be induced, going through stress/non-stress tests, etc. - so we hope Nick decides to make his world debut right around his due date :)
Posted by tejl at 6:23 AM