Today Nick is 34 weeks old. Only 42 days to go! Nick continues to move a lot, and now his movements sometimes cause me some discomfort - but it's ok, it's still a miracle to me every time I feel him move! Only a few more weeks until I'm officially full term - but we hope Nick decides to stay in there until his due date :)

According to The Cradle, if Nick was born now, he would not only be able to make an efficient transition from the womb to the outside, but he would also be able to resist disease. This day marks the end of eight months of pregnancy. I'm heading for the home stretch.

According to Pregnancy Weekly, Nick is tipping the scales at nearly 5 pounds and is 18 inches from head to heel. He is running out of room in there and I may now be able to tell whether it is a hand or an elbow pushing against my belly. The protective vernix coating on Nick's skin is becoming thicker, but the lanugo hair is almost gone. Nick may begin to get into position for delivery (hopefully head down). If Nick is in the breech position, my midwife will continue to monitor his position in the hopes that he will turn. If not, I may be asked to undergo external cephalic version, or ECV. (Nick is still head down, thank goodness - ECV sounds scary!)

According to Baby Center, Nick now weighs about 4 3/4 pounds (like an average cantaloupe) and is almost 18 inches long. His fat layers — which will help regulate his body temperature once he's born — are filling him out, making him rounder. His skin is also smoother than ever. His central nervous system is maturing and his lungs are continuing to mature as well. If I've been nervous about preterm labor, I should be happy to know that babies born between 34 and 37 weeks who have no other health problems generally do fine. They may need a short stay in the neonatal nursery and may have a few short-term health issues, but in the long run, they usually do as well as full-term babies.

This week in our Bradley class we talked about complications and C-Sections. Ugh. That's all I have to say about that.

This week we also toured the Alternative Birthing Center at Providence in Southfield. We have a very difficult decision ahead of us - I love my midwives, who will only deliver at Henry Ford West Bloomfield, but the ABC sounds so fantastic. Tomorrow there's an open house at HFWB, so hopefully my midwives can answer some of my questions and reassure me that HFWB is going to be able to give us the experience we'd like. 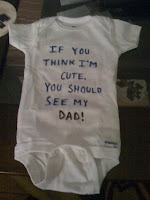 We had our first baby shower last weekend, hosted by my Aunt Cindi and my Aunt Tami, and it was so much fun! Each guest decorated a onesie for Nick - my family and friends were very creative, and it will be so much fun to think of each person when I dress Nick in her onesie. Here is a picture of the one I decorated at home after the shower :) And below is a picture of us at the shower. Nick received a lot of very nice gifts and it feels so much more real now that we actually have some baby stuff in the house :) 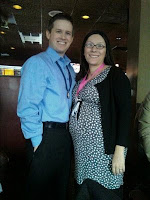