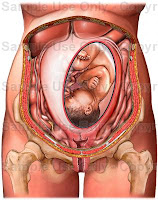 Today Nick is 36 weeks old. Only 28 days to go! Nick's movements are still strong and still frequent. I can see them almost every time on the outside now. I'm still lucky enough to be sleeping through the night. I am starting to walk funny, though - I think mostly it's a balance issue. My baby bump is pretty big by now! It's hard to believe how quickly this pregnancy has gone by - Nick could theoretically be born anytime between next Friday (March 20) and April 24! I honestly haven't even contemplated him being early, but one of my sorority sisters just had her baby 9 days early, so this weekend Jeff and I are going to finish "getting ready," just in case Nick can't wait until April 10 to meet us. :)

Our exciting news for this week is we hired a doula! Her name is Alicia and her company is called Cradle of Birth. We just really felt like we clicked with her at our initial consultation. She has a very soothing, stable manner, which I think will help me (and Jeff!) during labor and delivery. She's also younger than some of the other doulas we've heard about/planned to meet - for some reason, I'd much rather have a woman around my own age as a doula than someone my grandma's age. We will try to fit in three prenatal meetings with her - our first one is tomorrow morning, and we will discuss our birth plan.

According to Pregnancy Weekly, Nick has added another one-half pound and now weighs nearly 6 pounds, measures almost 19 inches in length, and is almost ready to check out of "Hotel Mom." Nick has moved downward into my pelvic cavity; hopefully headfirst. However, at this stage it is very common for babies to be feet first, or breech. If Nick is still in this position next week, my midwife may try to turn him using external cephalic version, or ECV. (Actually, I don't know how "common" it is. When Nick was still breech, I read that only about one in ten babies were still breech at that point, and only about 4% are breech at birth).

According to Baby Center, Nick is still packing on the pounds — at the rate of about an ounce a day. He now weighs almost 6 pounds (like a crenshaw melon) and is more than 18 1/2 inches long. He's shedding most of the downy covering of hair that covered his body as well as the vernix caseosa, the waxy substance that covered and protected his skin during his nine-month amniotic bath. Nick swallows both of these substances, along with other secretions, resulting in a blackish mixture, called meconium, which will form the contents of his first bowel movement. At the end of this week, Nick will be considered full-term. (Full-term is 37 to 42 weeks; babies born before 37 weeks are pre-term and those born after 42 are post-term.) Most likely he's in a head-down position. But if he isn't, my midwife may suggest scheduling an "external cephalic version," which is a fancy way of saying she'll try to coax Nick into a head-down position by manipulating him from the outside. (Luckily Nick is still head-down as far as we know! We'll check again at our midwife appointment on March 18).

This week in Bradley class we had a first stage (dilation) review. We also watched a beautiful video of some water births in Guatemala and Oregon. We learned a relaxation technique called the rainbow technique, where your coach asks you to picture an object in each color of the rainbow, one at a time. I think these guided imagery-type relaxation techniques will be very helpful for me - they will distract me a little and they make the time go by faster. We took a picture of all of us with our baby bumps - here it is :) Next week is our very last week! We're having a pizza party and second stage (pushing) review. 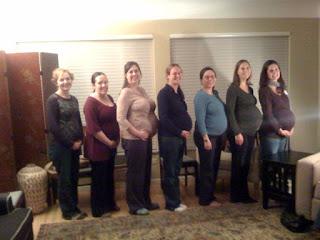 Tomorrow I'm going with a friend to my first mom-to-mom sale, and also to The Little Seedling in Ann Arbor to buy the rest of the stuff we need from there. Our diaper pail and starter kit arrived from Dirty Deeds Diaper Service today - although we don't need to start delivery until Nick goes to daycare, we wanted to set up our account and get the diaper pail. Things are coming together but I feel like we still have a lot to do. It's all very very exciting - our little boy will be here before we know it!!
Posted by tejl at 6:47 AM