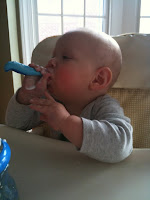 Today Nick is forty-two weeks old! I can't believe it - only 10 more weeks till his first birthday! He is standing up more and more, although he still holds onto something. He is very steady and has great balance. We've already seen him catch himself from falling, from sitting or standing, more than once. He is not waving or clapping yet, but he will reach both of his arms out to me when he wants me to pick him up - and I melt each time. :)

Last weekend, Nick and Jeff had some alone time while I went to a Wayne State event Saturday morning. The rest of the day we just hung out at home in the playroom. I tried to make Nick some homemade coconut milk yogurt, but it didn't work out. Sunday was Uncle Zack's 30th birthday, so we said happy birthday to him on Facebook from Nick's profile :) I gave Nick some goat milk yogurt in the morning - the first time I saw him use a spoon. It's pretty cute! So I took some pictures, of course :) He sure does love that yogurt. 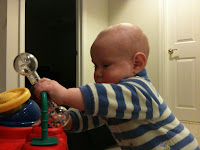 was Martin Luther King Day, so Jeff had the day off. Nick got to enjoy some extra time with dad, as Jeff picked him up early from daycare after taking care of some errands. Tuesday morning I had court, so I took Nick in a little late to daycare and got to hang out for a little while. This week we found out Nick is moving up to Infant B at daycare. He also started playing with his ear again, and today his daycare teacher texted me and said she thought he might have an ear infection, so I called the doctor and made an appointment. I took him in and the doctor diagnosed a right ear infection, and prescribed "augmenten" for it. We gave it to him tonight, and about 20 minutes later, he threw up, poor boy! I think he had a bad reaction to the antibiotics. I nursed him to sleep and he's sleeping peacefully now.

This weekend we had some plans, but we might put them on hold now, depending on how Nick is feeling. Tomorrow we were thinking about going to the Plymouth Ice Fest, depending on the weather. This week, we have nothing exciting going on. Next weekend should be fun though - we're meeting Grandma Audrey and Papa Norm at Somerset to finally exchange Christmas gifts and spend some time together. 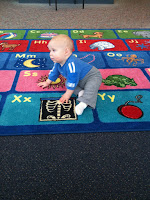 -up because of colds, and he's going to keep getting colds because he goes to daycare, and therefore he will keep getting ear infections until he gets older and his eustachian tubes are more vertical. If we continue to treat the ear infections with antibiotics, eventually his body could build a resistance to the antibiotics - and then when he's REALLY sick and needs them, they might not work :( We do need to treat the symptoms, though - if we don't treat the infection, on average it will take two extra days for the infection to go away, and if we're choosing not to treat the infection, I feel obligated to treat the symptoms for him so he's not miserable. I am going to buy some garlic oil to put in his ears, which is supposed to help treat the infection and be soothing, and I am going to look into some other homeopathic treatments.
Posted by tejl at 8:38 PM