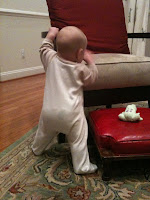 Today Nick is forty-one weeks old! Less than three months until his first birthday - where has the time gone?? I'm so glad I've been keeping up this blog. Years and years from now we probably won't remember some of this stuff, so hopefully this blog will still be here :)

Last weekend was fun! On Saturday, we drove out to Lake Orion to drop some donated milk off to a foster baby. Then we hit Great Lakes Crossing - haven't been there since we moved! It was great. We found Nick a tie for his one year pictures in a few months and the perfect snowsuit - and it was on sale for only $12! There are so many kids' clothing stores there, it was so much fun to look around. The rest of the day we just hung out at home. On Sunday, we took a family trip to Costco. Jeff and I ate some pizza while Nick enjoyed some organic baby carrots.

Monday it was back to work and daycare. This week we started sending plain, unsweetened goat milk yogurt to daycare with Nick - and he loves it! I plan to make him coconut milk yogurt using my crockpot, a 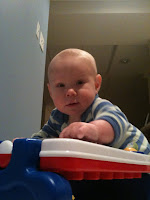 nd I bought the goat milk yogurt to use as the starter. Well, Trader Joe's only had a huge container of plain unsweetened, so I figured I'd have him try it just to use it up. Now I'm wondering if I should just keep buying that! He is feeding it to himself - his daycare teacher puts the yogurt on the spoon and then hands it to him. We haven't given him any at home yet - can't wait to tomorrow and see how it goes!

This week was rough on all of us. Ok, here's my theory! At daycare, they started giving him his milk in a sippy cup. Nick has Nuby no-drip sippy cups, which have a built-in valve that must be compressed to allow the liquid to flow. He is a baby, so naturally he compresses the valve by biting. Well, I think he started thinking he needed to bite when he was nursing to get the milk to come out, too, since he had to bite to get the milk out at daycare. Needless to say, this caused some nursing issues this week. I bought him some no-drip bottles to use instead at daycare, so he can still give himself his milk but without having to bite. This seemed to clea 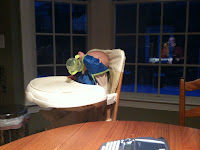 r up the biting while nursing, but then he started being congested at night - and biting started again, this time out of frustration at his inability to nurse with a stuffed nose. These conditions combined to deprive all three of us of precious sleep this week. Yesterday, Nick fell asleep on the way home from daycare, and he slept and slept and slept - until 7:30 this morning! He only woke up three times to nurse. We were a little worried and checked on him so frequently - he doesn't usually sleep that much, but we figure he was trying to make up for what he lost during the week.

Another thing we discovered this week is that maybe Nick's self-imposed bedtime doesn't have to be 6:00-6:30, maybe he just goes to sleep then because he's bored! So this week we made it a point to take him down to his playroom after he nurses when I get home from work. We've had some fun times 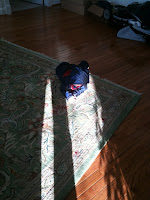 ! He is so mobile now. He loves to play with his toys. He is started to cruise behind his walker/push-toys. And he is just so joyful - loves to laugh and loves when his dad is being silly. So fun!

Today I had court in the morning, so I took Nick to daycare a little late, which was good because it allowed him to sleep in. When I came home, we all went down into the playroom and played for a little while, then Nick was asleep by about 7.

Tomorrow Jeff and Nick will be on their own for a few hours while I go to an event for the LAA. Sunday Nick has a playdate scheduled with his friend Emily - hopefully this time they'll both be awake at the same time :) Monday Jeff has the day off for the Martin Luther King Jr. holiday, so Nick will probably only go to daycare for a few hours, if at all. The rest of the week is normal!

This week we struggled with the idea of weaning Nick. I don't plan to begin totally weaning him, if he doesn't self-wean, until he's at least 18 months. But night-weaning is a different story. I long for the nights forty-one weeks ago when I slept straight through until morning. Due to the biting/congestion issues, he was unable to night nurse two whole nights - that's halfway to night-weaning, really, so we struggled with the idea of just following through. However, I am fully committed to nursing/pumping until Nick is a year old, and I'm afraid of what night-weaning would do to my supply. Therefore, I will not even think of night-weaning him until he's close to 11 months old. I don't think he's hungry at night - sometimes he nurses for a minute or less - but I still think it helps my supply so I would like to allow him to keep it up.
Posted by tejl at 9:10 PM