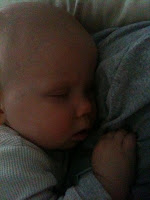 Today Nick is forty-three weeks! And the poor boy - he's definitely had better weeks. It feels so terrible to have a sick baby :( I would rather be sick every day of my life than have Nick be sick ever.

Last weekend was rough for Nick. He continued throwing up overnight Friday and into Saturday. He probably threw up every other time he ate. We cut him off of solids and just nursed, because breastmilk is so much easier for babies to handle. Throughout, he was his active and happy self though! We *thought* he was feeling better, so we decided to go for a late lunch to Panera. We brought some solids for him and enjoyed a nice lunch ourselves, but after we were done eating and we started giving him some sweet potatoes, he threw up :( We cleaned up after him and went home. Later on, Grandpa came over and we were all hanging out in the basement and the playroom. Nick was still throwing up, and even threw up water. I called our next door neighbor, who is a pediatrician, and asked her advice. She said we should give him Pedialyte (which I didn't - I don't believe in Pedialyte, I believe in nursing!) and monitor him closely, esp 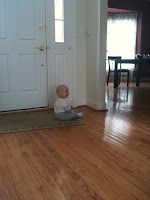 ecially for dehydration. When he threw up the water though, that was the last time he threw up. That night he slept and nursed normally. Sunday he seemed to be much better - no throwing up. We decided to go to the Plymouth Ice Fest, but unfortunately, it was pretty warm for January in Michigan and most of the ice sculptures were melting, and some had already collapsed. We just walked around and enjoyed the fresh air. After Nick's second nap, we journeyed out to the model home here in our neighborhood to check it out and see if there were any good ideas we could incorporate into our house. It had a neat loft area with stripes on the walls and a chalkboard wall, so we are thinking about trying to incorporate stripes into the playroom.

Although Nick seemed to be feeling better and wasn't throwing up, I decided to stay home with him on Monday. If he was sick and his illness was just incubating, I would have felt terrible taking him to daycare and getting other kids sick. We had an ok day - he had trouble napping though. He wouldn't go down for either of his usual naps. For his first nap, he ended up sleeping in the car - I had p 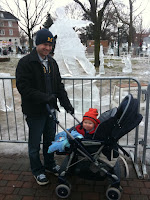 laced an online order at a local health food store, Zerbo's, and needed to go pick it up. The order included garlic oil for Nick's ears and probiotics for his tummy. Since he fell asleep, I ended up driving around for a while so he could get a good nap in. Then we came home and played for a while, but again, he wouldn't go down to sleep when it was time for his second nap. He finally fell asleep at 4 pm - when he'd usually be waking up - and he slept until 8 pm, when he promptly woke up and stayed awake until 11! Getting him off his schedule (which is self-imposed but which he's been pretty consistent with) always makes me nervous. But Tuesday he was back to his normal schedule. He had a good day back to daycare, and ate solids again. He had some issues but nothing that concerned his daycare teachers. I've been calling and checking on him daily. I did decide to cut back on his solids a little, because I want him to drink his milk - he clearly needs the immunities he gets from my milk! I have also been putting probiotics in his 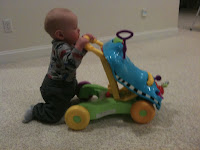 milk. Wednesday was even better, and today they said he was back to his normal self and had all his energy back!

This weekend should be fun. Tomorrow is a "free day" - we can do whatever we want! We might go to downtown Northville and check out the organic co-op and stop by Baby Bliss. Sunday we are meeting Grandma Audrey and Papa Norm at Somerset to exchange Christmas gifts and spend some time together. We haven't seen them since the summer so we are looking forward to that. The most exciting thing coming up is that Aunt Krystyn is coming for a visit! Our friend is having a bab 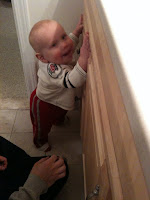 y shower next weekend, so Aunt Krystyn is flying in to town. We are going to the shower on Saturday, and on Sunday we have decided to take Nick to brunch in our jams - just like in the old days :)

Nick still has the ear infection. I stopped at Whole Foods on Wednesday and bought him some Hyland's ear drops - they are supposed to help with earaches, but we struggled to get the garlic oil drops in his ears so we haven't tried to put these drops in yet. He has been digging his thumb into his right ear a lot, especially when he's nursing, so I know the ear infection is still bothering him :( I also bought him some Vitamin D drops to hopefully help with his immune system. He is drinking a little more milk now that I cut back to two solids at daycare, instead of the three or four I was taking. And he will be moving into Infant B on Monday - which I am hoping will help with his naps at daycare! He'll be in a room with babies much closer to his age and they all seem to get on a similar schedule, and sleep for two hours in the afternoon :)
Posted by tejl at 6:31 AM