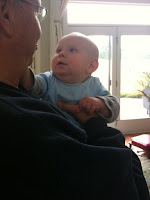 Today Nick is thirty-six weeks old. He cut his seventh tooth this week! His eighth probably won't be too far behind - he's been cutting them two at a time.

Last weekend wasn't terribly exciting. Saturday I went to a LAA retreat at the Law School while Jeff and Nick stayed home. Grandpa came over to play with Nick and help dad out a little. When I got home, Nick was ready for a nap. After he woke up, we decided to go do some Christmas shopping at 12 Oaks. Bad idea! The mall was PACKED (um, I thought we were in the middle of a giant recession?) and we struggled to get in and out of the stores. By the time we left, I should have known Nick would be hungry and I should have nursed him before we left - he cried almost the whole way home, poor little guy. Once home, we nursed and he went calmly to sleep. I love that babies are so forgiving of our poor planning! Sunday we just hung out at home. 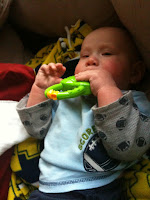 Monday it was back to work and daycare. Tuesday night Nick had a rough night, and a rough day Wednesday too. We weren't sure what was going on, until that 7th tooth popped through :) Nick had an exciting day at daycare this week - something happened to the sprinkler system, causing a flood, and the daycare had to be evacuated to the local coffee shop! They wheeled the babies out in their rolling cribs, three to a crib. Miss Amanda said Nick took it all in stride, enjoying the ride and looking all around at the coffee shop :)

Tonight we did parents' night out again. Nick stayed at daycare and we went out to dinner at Mexican Fiesta in Canton. Then we stopped at Target to buy a Christmas ornament for my mom and then we went to Lowe's to check out the chalkboard paint. When we went to pick Nick up, he was fast asleep - we felt so bad, of course he woke up when we put him in the car. He was a little fussy but nursed back to sleep at home.

Tomorrow is the Christmas tree ceremony at Grandma Juarez's cemetery. The three of us are meeting my Grandma and some other family there. Sunday we are meeting Azita for lunch in Dearborn, and then hopefully taking my Mac in to the Apple store to get checked out and to finish up some Christmas shopping.

Nothing exciting happening this week, until Thursday - Nick's daycare is giving a Christmas concert, where the 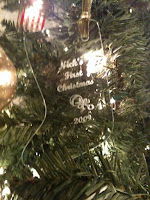 preschoolers will sing, and then all the kids get to visit with Santa. Jeff and his parents will be attending. Saturday is my family Christmas party, so we're going to Aunt Cindi's during the day to give Great-Grandma Pingle her present and visit a little - the party is officially at 7 pm, which is too late for us, since Nick has a self-imposed bedtime of 6:30 and he doesn't sleep well outside of daycare and home.

Nick's legs are getting so strong, and he is taking guided steps. He climbs all over us and pulls up constantly. He still hasn't crawled on his hands and knees yet, so maybe he'll just skip that and go straight to walking in a few months. We are trying to figure out how we can set up some stuff for him to cruise on - our house isn't really cruise-able right now. We want to think of some stuff to set up for him in his playroom, because as soon as we have that set up, we'll probably be spending 90% of Nick's awake time at home down there. So that's what we're working on now!
Posted by tejl at 10:44 PM

Don't let him skip crawling . . . it is a vital skill that is linked to cognitive development! My mom baby-sat for a kid who had to learn to crawl at age 10 because he never did/was made to . . . caused all sorts of problems. Read up on it, its facinating.