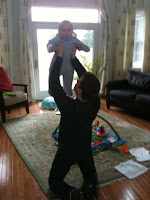 Today Nick is thirty seven weeks old! Wow! It's going by so fast.

Last weekend we went to a Christmas tree ceremony for my mom at the cemetery. It was very nice - a lot of my family came. Nick stayed in the Moby during the service and barely made a peep! He is very observant and I think he just enjoyed looking around at all the different people and taking everything in. After the service we came home and just hung out.

Sunday we went to Baby Baby, a consignment store in Northville, and found Nick a snowsuit. It's a 9-12 months snowsuit - we don't anticipate letting him play in the snow until he's closer to a year old. Then we all trekked to 12 Oaks to try to get my MacBook fixed. They did not fix it, but Nick was hanging out in the Moby and got a lot of attention :) After he was asleep that night, Grammie Lundberg stopped by to watch him while Jeff and I ran out to Home Depot to get the chalkboard paint for h 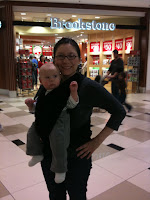 is playroom! We got there only 20 minutes before closing time though, so we just grabbed the paint, a cord we need to make the diaper sprayer work on our toilet, and came home.

Monday was back to work and daycare. Tuesday night Nick didn't sleep very well - he was up a couple times, we think because of his teeth. Wednesday we had a bad surprise - our furnace went out :( We put a space heater in the bedroom and all snuggled together under the covers for the night. It didn't get that cold, thankfully. Jeff worked from home Thursday and a service was able to come out and get it fixed - just in time for Jeff to make it to TLE for their holiday concert! He held Nick while Grandpa recorded the concert - it was so cute. Then Nick got to see Santa for a second time - this time he didn't like him though, he started to do "the lip" so Jeff picked him back up pretty quickly :)

Thursday night was interesting. I put Nick to sleep at his usual time of 6:30, and around 7:30 I ran out to Trader Joe's and to pick up a toy I bought for Nick on Craig's List. Around 8:30 Jeff texted me that Nick was up. I didn't get back until 15 minutes later - and Nick was wide awake. I tried to nurse him back to sleep twice, rocked him, walked him - nothing worked. He didn't go back to sleep until almost midnight :( I felt terrible - he was obviously overtired. I think if Jeff had tried to give him a bottle, he might have gone back to sleep right away, but I guess we'll never really know. 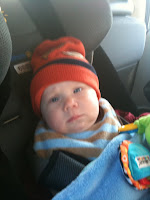 he day Grandpa started on the chalkboard wall, and he found the greatest thing - magnetic primer! So Nick's chalkboard wall will also be magnetic. Jeff and I were so excited - we were just talking about how we could get something metal into the playroom to put ABC magnets on, etc., and this magnetic primer solved that problem for us!

Tonight we went to a surprise 30th birthday party for a friend of Jeff's, and Nick's primary caregiver at TLE came over to baby-sit. It was so amazing to know that someone who watches Nick every day when I'm at work was with him while we were out. He didn't even nurse to sleep before we left - he wanted to stay up and play :) It did make me a little sad - does that mean we're too boring?

Tomorrow is my family Christmas party. We're going to stop by Aunt Cindi's in the afternoon to exchange gifts with Great Grandma Pingle. Sunday we are working on the playroom, cleaning up around the house, and possibly having lunch with Melissa and Jim. This week is a short week - I only work through Wednesday. Jeff has to work on Christmas Eve, but I'll be home with Nick :) TLE is open until noon but I'm going to spend the day with him. Christmas Day we'll wake up and hang out here, and then go over to Grammie and Grandpa's for dinner in the afternoon.

Next weekend should be fun - we're having a Bradley reunion here at the house on Sunday. One of the couples from our class is in town over the holidays, so we thought it would be fun to try to get everyone together.

Jeff and I have decided to start giving Nick solids on a regular basis. We think he is trying to tell us that's what he wants. I hope that he will continue nursing when we are together, but with giving him solids I anticipate him drinking less milk while at daycare. I am concerned about keeping up my supply though - only 3.5 months to go until he's a year old and I can put away the pump until the next baby! I hope I can make it!! :)
Posted by tejl at 11:41 PM