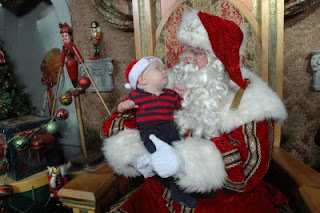 Today Nick is thirty-five weeks old! We can hardly believe how fast the time has gone by. He is getting bigger and stronger and has more personality every day! As you can see from the video I posted earlier - he's now pulling up! He will even take some tentative guided steps on his tip-toes - so cute!

Last weekend was full of fun. Aunt Krystyn was still visiting. Saturday we all went to Somerset for Nick's first visit with Santa. What a great Santa experience they give you there! You have a private setting with Santa - there's no big huge line snaking out behind you. Instead of getting prints, you get a disc of pictures and then you can print as many as you like - although a couple prints of each picture from Ritz are included in the price. Then, after your visit is over, they give you three silver coins to "spend" at a certain list of stores. We had o 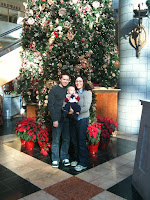 ur visit with Santa, and they let us do what we wanted - so we each had an individual picture with Santa and Nick, then we had a picture of Nick and parents and Santa, then Nick had two pictures with Santa alone. He didn't cry or anything - but he didn't smile either :) With his coins he got a koala finger puppet from Pottery Barn Kids, a compass from North Face and an elf pass (whatever that is) from Build-a-Bear. Afterwards we want and visited Great Grandma Pingle for a little while. She was shocked at how big Nick is getting! Then we drove out to visit Grandma Juarez's grave. Nick napped while Aunt Krystyn and I had a good visit/cry with our mom. Sunday Aunt Krystyn left bright and early for North Carolina. The rest of us spent a lazy day at home. That day Nick got a lot of practice pulling up, but his legs were very wobbly and sometimes his knees would seem to buckle. That night we took Nick to see the Wayne County Lightfest - but he fell asleep about five minutes into it. Maybe next year he'll enjoy it :) 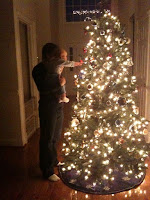 Monday was back to work and daycare - always tough after such a long weekend! Monday we stuck with the 4 oz - 6 oz - 4 oz feeding pattern for Nick. This week was definitely hit or miss with Nick and bottles - sometimes he ate a lot and sometimes he didn't. Tuesday was the six month anniversary of Nick starting daycare/me going back to work/pumping. I can't believe it's been six months! And so far so good - so hopefully we can make it another four :) Wednesday we received the disc of Nick's pro pics from Mod4 - they were take on Halloween. I wanted to include some in our holiday cards so I sent them to Costco to be printed. Nick got progressively better at pulling up all week, so Thursday night Jeff made the video of him pulling up - as you can see, he stands tall and strong! Amazing what a difference a few days makes to a baby. After Nick went to sleep Jeff and I signed, stuffed and stamped all of our holiday cards. Of course I did not print enough pictures - so if you want a printed picture of Nick and didn't get one, just let me know :)

Today I put the cards in the mail after dropping Nick off at daycare. I got home a little late from work today, so Nick nursed rig 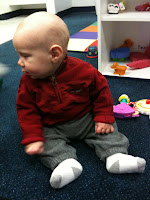 ht to sleep as soon as I got home.

Tomorrow morning I'll be at my LAA retreat, so dad and Nick will have some alone time. The rest of the day we don't have any plans. Sunday we don't have any plans - maybe we'll get some Christmas shopping done. This week is a normal week too - nothing exciting going on. Next weekend there is a Christmas tree ceremony at Grandma Juarez's cemetery, and then we might go to the Greenfield Village Christmas display. Sunday I am hoping to have lunch with our friend Azita and her daughter Lucy.

Only three weeks until Nick's first Christmas! We actually have no special plans for Christmas Eve. Nick will be asleep by 6:30-7, so Jeff and I will probably just spend some quiet time at home. We did agree not to buy Nick presents, but I think I'll buy him some stock stuffers at least - he'll probably like playing with his stocking :) Christmas morning we'll wake up and hang out at home, then later on we'll go to Grammie and Grandpa's for the gift exchange and dinner. Nick is big enough to sit up and kind of participate, but we're sure next Christmas will be much more exciting for him :)
Posted by tejl at 10:59 PM