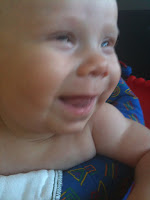 Today Nick is twenty-four weeks old! And . . .drumroll please . . . he is sitting up! He sat up Saturday for the first time with no support, but he was pretty hunched over, and every day his back has gotten straighter and straighter. It's so exciting, but scary! He's too old! We keep telling him to stop growing, but he's not listening.

Last weekend was a fun weekend. Saturday Nick had his first birthday party - we took him to Cooper Swanson's second birthday party! In the morning, Nick watched tv for the first time. We have decided that he can watch sports-related tv, but that's all. So he watched College Gameday with us :) I don't think he knows what he's watching yet, but the tv still draws him in because of the movement and colors. Then we went to the party and watched the last bit of the MSU v. CMU game and almost the whole UM game. Twice during the Michigan game, we made Nick cry with our loud cheers, poor boy! Sunday I had a baby shower to go to, so Nick and dad were on their own for a little while. When I got home, Aunt Krysty 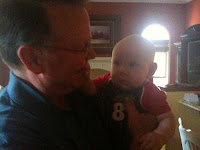 n reminded us it was grandparents' day, so we took Nick to see his grandparents. He made it through a couple of hours at their house without crying, so that's progress!

Monday dad had a doctor's appointment, so mom picked Nick up from daycare. Tuesday I picked him up again so we could go to moms' night out - a much needed evening with some great local moms! We went to a local coffee shop called Cafe O'Lait in Livonia - what a cute place! They had really comfortable leather chairs and flavored nondairy coffee cream, so I'll definitely go back. The other moms gave me some great advice about how to maintain/increase my milk supply to make sure Nick can nurse his whole first year. Wednesday I nursed Nick to sleep around 6:30 - and fell asleep myself! I didn't wake up until 8 pm. Then, Nick woke up around 10:45 and didn't go back to sleep until 11:30. However, he didn't wake up to nurse again the whole night! He didn't wake up again until 6:30 am - his usual time. Part of me would like him to sleep through the night, but part of me is very concerned about what that would do to my milk supply. He's not even six months old! I'm not ready for him to sleep through the night yet . . .

Yesterday we stopped by grammie and grandpa's again to give grammie back her brownie pan. Nick showed them he can sit up now, and grammie even saw his two teeth! Today I have some baking to do for some events we have this weekend. Baking should take up the whole night!

Tomorrow we're going to Connection Parenting. Sunday morning we are going to clean out Grandma Juarez's apartment and then we are going to our Bradley class reunion. The only exciting thing happening this week isn't until Thursday - Nick will be home with dad all night while I go to see The Phantom of the Opera with Lauren to belatedly celebrate our last birthdays in our 20s :)

Lately I've been thinking a lot about Nick's food. He is still EBF and I don't mind pumping at all - it actually gives me a break from my desk :) He is nursing almost exclusively on my right side, but I still pump both sides. I want to try to get him to nurse on my left side again, because I'm nervous my right side can't support him for another six months on its own. Some of my mom friends have suggested I take him to a chiropractor, because they think it might be physically uncomfortable for him to nurse on that side. I'll try it, but I think we've both just developed a preference for the right side. At first he nursed equally on both sides, but I suppose a physical problem could have developed after birth, around 4 weeks or 8 weeks. We do not plan on giving him "baby cereal." We do not plan on giving him pureed baby foods, either. We plan to start him on soft adult foods - banana, avocado, steamed sweet potatoes and maybe carrots. My parenting message board moms recommend a book called "Super Baby Food." I'm going to pick that up and see what it says! Jeff and I have accepted that we are not "traditional" parents. We are trying to follow our own path, and research each and every option for Nick, and try to make the best decisions for him and us. We don't want to do anything with or for Nick because "everyone does it" or because our parents did it, etc. We listen to what everyone says, do our own research, and then make what we think is the best decision - like with co-sleeping, like with nursing, and now with food. He is such a happy baby, and he's growing and healthy, so it seems like so far, we're doing a pretty good job! :)
Posted by tejl at 6:48 AM