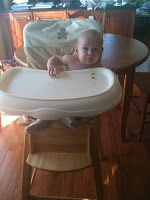 Today Nick is twenty-five weeks old! This week was a fun week for Nick. He is getting better and better at sitting up, and he is scooching himself around on flat surfaces - he'll probably figure crawling out within the next couple months! We keep telling him to slow down but he's not listening :)

Last Saturday we tried to give Nick his first food. Major fail! He wanted nothing to do with it! We tried avocado and banana - he made sour faces at both. That's ok though - nursing will just have to be enough for now. We'll try food again in a few weeks. Later we all watched the UM v. EMU game. Another win for Nick! Then we had a playdate with our Connection Parenting group. We baked a cake for one of the dads' birthdays, and we were rewarded with a loss for MSU! After our playdate we came back to the house and started organizing the basement. We set up Nick's new ABC/123 playmat and let him play on it for a little while - he had fun. Sunday morning we went to start cleaning out Grandma Juarez's apartment, then we went to our Bradley reunion. So fun to see all the babies! Well, three out of six. Nic 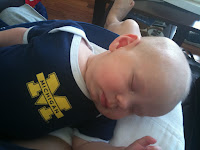 k was the only boy and he had eyes for a little girl named Emma. :) After the reunion we brought some of Grandma Juarez's stuff back to the house, with help from Aunt Cindi and Tom. Great-Grandma Pingle came back to the house with us too, and grammie and grandpa came over to help unload. Then we ordered pizza and everyone watched Nick play in his exersaucer. 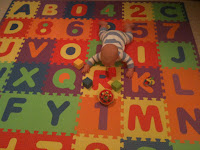 dinner during Detroit Restaurant Week, and then to see The Phantom of the Opera with her friend Lauren to belatedly celebrate their last birthdays in their 20s :)

Tonight we are not doing anything. Mom is going to catch up on sleep and dad gets to catch up on life - he was such a trooper, taking care of Nick on his own quite a bit this week.

This weekend should be fun. Tomorrow we are going to take Nick to the tailgate at Michigan Stadium to meet grammie and grandpa's friends. Sunday we are going to finish up Grandma Juarez's apartment, then hopefully get caught up on chores around the house. T 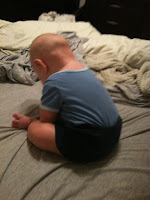 his week is a laid back week - Nick does have his first "school" pictures on Wednesday though! We're so excited!! We hope they turn out :) Nick turns six months old soon, so we plan on scheduling some more family pictures soon too.

We plan on setting up Nick's playroom soon. Our plan is to paint the whole back wall with chalkboard paint, and the other three walls blue - a nice sky blue, so it will be good for boys and/or girls :) I am thinking about using contact paper to put some letters and numbers up on the walls - contact paper so we can easily peel them off when the kids get bored with them :) We plan on moving his new playmat in there to cover up part of the floor, and leave the rest bare, so he can have a nice big space to play with push and riding toys when he's ready. We plan on using bins to set up his toys in the big closets that are already in that room. Eventually we'll get a little table and chairs and an easel down there. Any other ideas???
Posted by tejl at 6:34 PM