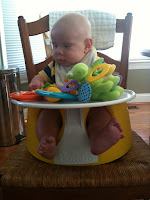 Today Nick is twenty-one weeks old! He'll be five months old this Thursday - we can hardly believe it! He is definitely a drool-baby, but he doesn't seem to mind. He is happy and cheerful no matter what!

Last Saturday we had our Connection Parenting meeting. Mom and Nick went to that while dad stayed home and went to Busch's to pick up some things for dinner. Grandpa was supposed to come over for dinner, but he didn't feel well, so it was just mom and dad. Sunday mom and dad took Nick to Target and Meijer. He was very patient and stayed in his car seat in both stores, while dad played with him and mom pushed the cart.

Monday started another week of daycare and work. Monday night mom, dad and Nick met grammie and grandpa at a preview for a moving sale. Nick stayed in the Moby and happily walked around the house, looking for good deals - but didn't find any. Tuesday dad took his car to 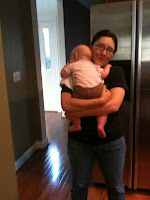 the shop to be repaired, but mom got stuck in traffic, so dad was still the first one to get to daycare to pick Nick up. Wednesday mom had to go to Costco after work to pick up some items for the gift bags for the LAA golf outing, so Nick and dad were on their own for a little while. Nick was so cute and waited up for mom to get home! Thursday mom dropped off the water to the golf course for the golf outing, but wasn't too late, so Nick was still up when she got home. Today was the actual golf outing, so Nick and dad were on their own the whole night! Dad was nice enough to send mom a picture of Nick while she was at dinner. When mom got home, Nick was already asleep, so she just kissed his cheek and stroked his hand.

Tomorrow we are meeting Azita and Lucy for lunch at Pizza Papalis in Dearborn. We are so excited to see them - we haven't seen them since Nick's second week at home! Then we have Connection Parenting. Sunday we are going to take Grandma Juarez out to breakfast, then mom and Nick are going to hang out with Lisa and Emily. This coming week, Jeff has to pick up his car from the shop on Monday, so I'll pick Nick up from daycare most likely. Tuesday N 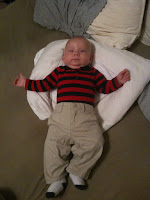 ick and I are going to mom's night out at First Cup. Wednesday Jeff is going to some Republican thing, so Nick and I will be on our own.

Thursday and Friday we'll be packing and getting ready for Nick's first plane trip! Saturday we are leaving for four days in Raleigh! We are excited and nervous, and we just hope Nick has fun. If anyone has any tips for Nick's first flight, please leave them in the comments :) Luckily it's a short flight! We are taking his infant carrier, which I bought a travel bag for, and we bought some G diapers so we don't have to worry about washing his BGs at his Aunt Krystyn's house. Krystyn's friend Becky is lending us a Bumbo and playmat, and found a friend who can lend us a Snap & Go while we're there. I'll bring both Mobys (Mobies?) and probably the Ergo, too.
Posted by tejl at 10:32 PM