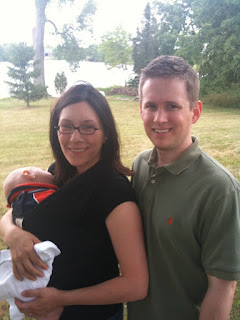 Today Nick is 18 weeks old! This week was a tough one - Nick had some kind of virus, which caused him to be congested and break out into hives. Mom was home with him Monday and Thursday, and dad was home with him Tuesday and Wednesday (with some help from his parents!), and then he went back to daycare on Friday. The hives looked pretty bad but he kept his cheerful disposition, for the most part. We have noticed that he has pretty much stopped giving his hunger cues though - he'll be happy and cheerful and then out of nowhere, he'll burst out crying until he's nursed. We hope this is a temporary change - it's so sad to see him cry!

Last weekend was a fun weekend for Nick! Saturday we all went to Great Aunt Laura's parents' 50th anniversary party. Laura's brother owns a farm with Grandpa, which is where the party was held. They have a gorgeous pond, an old farm house, a huge garden, and acres and acres of crops. Nick was finally able to meet Great Aunt Laura, Great Uncle John, and first cousins once removed Steven and Melissa. There were some other children there, and one boy, Sean, who is 8, seemed particularly enthralled with baby Nick. Unfortunately for Sean, his mom told us there will be no more babies for them - Sean is the second youngest of 7!!

Sunday Nick got some new-to-him toys - an exersaucer and a Little Tikes slide. The slide is in the basement for now - it won't be nice enough outside to use it outside when he's big enough to use it, so we'll let him use it on the carpeted part of the basement. He loves his exers 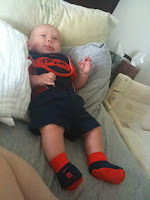 aucer! Jeff and I didn't want to rely on a lot of "things" to help us raise Nick, so we didn't register for bouncers, swings, exersaucers, etc. But he loves his exersaucer at daycare, so we decided to get him one for home, but we only put him in it to play with him in it, we don't put him in it to walk away and do a bunch of stuff while he entertains himself. We do let him entertain himself for short periods of time with the gymini - I read that it's developmentally appropriate for his age, so I try hard to do that sometimes.

Monday started out as a normal day. Nick had a bit of a runny nose, but when I took him to daycare, his caregiver said everyone around had a runny nose. I noticed a big red spot on the crook of his arm, but I thought it was a bug bite. Then around 9 am I received a call from the daycare, telling me the red spots had spread to his arms and legs. They said he didn't have a fever, just this "rash." I called the doctor and they said to bring him in, so I picked him up from daycare and took him to see the pediatrician. His regular pediatrician was on vacation, so we saw the other pediatri 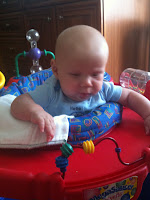 cian, Dr. Adams. Nick weighed in at 15 lbs., 9 oz.!!! Then Dr. Adams checked him out. She said his ears and throat looked good, and based on the congestion, she diagnosed the hives as viral. She said not to give him anything unless he seemed itchy, and then to give him benadryl. Well, we've decided to try to avoid giving Nick traditional medicines unless absolutely necessary, and he never once seemed uncomfortable or itchy, so we didn't give him anything. I was sad that he was sick, but it did allow for some extra cuddle time :) Monday night John, Laura, Melissa, Steven, grammie, grandpa and great-grandma Radley all came over to show John and Laura our new house. Nick pretty much slept the whole time - they came over past his bedtime. The hives were much better by Monday night, but then Tuesday morning they came back with a vengeance. Tuesday and Wednesday dad stayed home with Nick, and grammie and grandpa both came over to help so dad could do some work from home. Thursday the hives were gone, but the runny nose and sneezing weren't, so mom stayed home with Nick again.

Today Nick seemed much better, so back to daycare he went! His caregiver missed him while he was gone and seemed very happy to see him this morning. Tonight mom and dad took Nick to downtown Plymouth. Their summer concert series "Music in the Air" was going on, featuring a band called Blues C 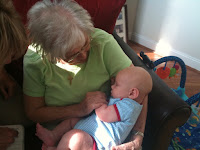 aster, so mom and dad walked Nick around in the snap & go, and then ate dinner at Zapata's. Nick slept pretty much the whole time :) We had fun though! Plymouth is a great family town, and it was awesome to see so many other young families out, pushing strollers and watching their toddlers toddle :)

This weekend is a low-key weekend. Tomorrow is our Connection Parenting meeting, and Sunday we're going over to grammie and grandpa's for dinner. This week is Nick's 4 month well-baby visit, which means more shots :(

Wednesday is our three year wedding anniversary :) We are currently struggling with how to celebrate. We plan to go to Boodles, which we consider "our place" and where we had our rehearsal dinner. But we can't decide if we want to take Nick or get a baby sitter. We are usually there for a couple hours, which would be a long time for Nick, but he is in daycare all week, so it's tough to give up some of our weekend time with him. He has only been 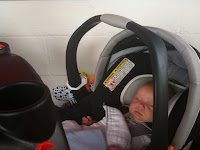 baby-sat twice besides daycare and we are proud of that! It might be nice for it to be just the two of us, but the whole time we'll just wonder what Nick is doing. Oh well, we'll decide eventually what to do . . . .

The other thing we are struggling with right now is Nick's mouth! We can't decide if he's teething already or not. Four months is really early, according to the book, but a few people who have seen him have commented that he's teething. He is constantly sucking on/biting on his hand and drooling, but if I run my finger on his gums I don't feel any teeth. I bought some Hyland's teething tablets, just to have them on hand. Stay tuned to see if any teeth pop up in the next month or so!!
Posted by tejl at 9:38 PM