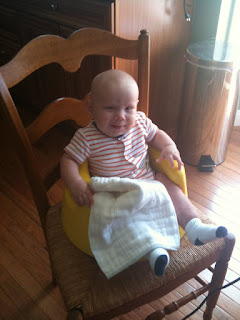 Today Nick is nineteen weeks old! Wow!! Nick was back to his old self this week - sleeping soundly, nursing, laughing and smiling. It was great to see! He is getting so strong and really getting bigger! His hair isn't filling in but the hairs he does have are getting longer. We are so anxious to see what his hair will look like!

Last Saturday while dad worked on his charity website, mom and Nick went to Costco. It was pouring down rain but we just had to go! After we came home, it was time for our Connection Parenting meeting. Sunday during the day, we hung out at home. In the afternoon we all went over to grammie and grandpa's for dinner, to say good-bye to Great-Grandma Radley, who flew back to Arizona on Monday.

Monday mom had court in the afternoon, and came straight home from there instead of going back to the office, so she picked Nick up a little early. Then dad's friend Nick stopped by. Nick and Nick are both Nicholas Paul :) Little Nick played with his gymini while dad and big Nick chatted. Then little Nick nursed to sleep. Tuesday was a normal day. Wednesday was mom and dad's three year wedding anniversary! Mom came home from work and nursed Nick to sleep, then mom and dad went out to their favorite restaurant for a nice dinner, and grandpa sat with Nick. Nick slept the whole time mom and dad were gone :)

Thursday was Nick's four month well-baby visit. He weighs 16 lbs., 3 oz and is 25.5 inches long! His doctor checked him out and said he is very strong. His doctor asked if he's laughing and smiling yet, and mom and dad said yes, then when the doctor checked his hip joints, Nick decided to demonstrate his laughing and smiling skills :) Nick received three shots. He cried during the injections but stopped crying as soon as mom could nurse him :) After he nursed, mom and dad dropped dad's car off at home and went to get take-out from Noodles & Co. While mom and dad waited for their food, Nick decided to fall asleep - in the middle of the loud, busy restaurant! We are grateful he can still sleep anywhere, through anything :)

Today is a normal day. Maybe we'll go out to Plymouth again tonight and walk around - last Friday was fun! Tomorrow we have our Connection Parenting meeting. It's Dream Cruise weekend over on the Woodward corridor, but Nick is a little too young to enjoy it, so we'll probably wait a few years before we take him. Sunday mom is having some mom friends over for a cooking tribe meeting (the art of pie crust). This coming week looks pretty normal - mom will pick Nick up on Monday, because dad has a dentist appointment. Next Saturday is a pool party here at the club house, so maybe we can finally meet more of our neighbors!

Everyone says it's amazing how fast babies grow, and they aren't kidding! Nick is already changing so much, we've already talked about what he "used" to do. For example, the first month or so, Nick would fall asleep every day on the way to daycare - but he doesn't do that anymore! He is getting more independent, and can play on his own for short periods of time. He used to lay completely still for diaper changes and now he's a total wiggle worm! He used to get upset and sometimes cry a little when we changed his clothes/dressed him and now he's fine. He used to cry in the bath, and then just after the bath - but now he laughs and smile and plays both in and immediately after his bath. He's already 1/3 of the way to a year old - time sure is flying by! We love our little boy so much and it is amazing to watch him grow and change day by day :)
Posted by tejl at 6:20 AM