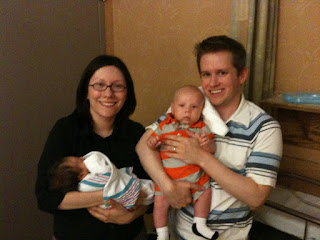 Today Nick is twelve weeks old! Almost three months - we can hardly believe it! He's been in daycare now for four weeks and he seems to be doing great. Pumping is still going ok too - I am nervous that I have at least nine more months of this though. I hope my body can keep it up!

Saturday was a fun day. Mom and Nick went to law school for the "Lawyers in Transition" seminar - as volunteers, not as participants, of course. Nick got to meet some of mom's colleagues from the LAA and everyone thought he was adorable. He did great just hanging out in the lobby of the Law School for four hours! Sunday was Father's Day. In the morning, Nick gave dad a card, some comfy lounge pants, and a project Nick made for dad at daycare (with Miss Melissa's help) - so cute!! Mom, dad and Nick went to Grammie and Grandpa Lundberg's for brunch. Everyone except dad fell asleep until almost 5, so Father's Day dinner was delayed. Mom made chicken kebabs (with dad's assistance when Nick got hungry!). Then it was another work week! Monday and Tuesday Nick had a hard time falling asleep until much later than usual, so mom and dad were busy playing with him until late and didn't eat dinner until around 9 or 10. Wednesday was bath night - Nick likes taking a bath now but still doesn't enjoy the getting out part!

Thursday night was very exciting - Nick's new friend Emily was born a little early, so we all went to the hospital to visit Lisa and Donnie and to meet Emily! She is pictured above - we decided to take a "family" picture to see what it'll be like when Nick's little brother or sister is born in 2011 (hopefully!). Then it was time to go home and pack to go up to Ludington for Tim and Stephanie's wedding. Mom and dad chose to sleep instead though, so today they were running late. Finally we got on the road around 12:30 pm. Luckily we only had to stop for Nick once on the way up, so we still arrived in plenty of time for the rehearsal.

Tomorrow is Tim and Stephanie's wedding, and Sunday we'll head home. Tuesday night mom has a digital scrapbooking party at daycare. Thursday night we are all going to Lisa and Donnie's for dinner and to spend more time with Nick's new friend, Emily. And Friday Aunt Krystyn's best friend is coming to meet Nick!

Some of Nick's contemporaries have already rolled over for the first time, so we are anxiously awaiting Nick's first attempt. He is a huge wiggle worm lately, moving his arms and legs a lot, especially during diaper changes! He smiles all the time and is generally a very happy baby.

I started reading a book called "Connection Parenting." The book suggests you start/join a "tribe" of like-minded parents, to discuss the different lessons of the book and how to apply them. It's no secret that I didn't have an idyllic childhood, and while I love Nick and raising an infant seems pretty instinctual, I am very nervous about my ability to properly parent him as he gets older. I have already connected significantly with the lessons of this book, and we are joining a tribe in Ann Arbor. Our first meeting will be sometime in mid- to late July. I'll write about what we discuss each week in a separate entry from my regular Nick entry. It's very exciting!
Posted by tejl at 10:34 PM