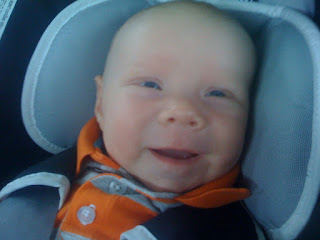 Today Nick is ten weeks old! He is a very smiley little guy now. He has finished two weeks of daycare and so far is doing great. We have adjusted how much milk we send with him so we aren't wasting so much, they are doing fine with the cloth diapers, and he is making "friends." :)

Last weekend was a lot of fun! Saturday mom went to a meeting in Royal Oak in the morning. On the way there she stopped at a garage sale to pick up an extra Moby :) When she came home, everyone went to the Indian Village Home & Garden Tour. The homes were stunning, and the owners very gracious to open up their homes to the public. Nick slept in the Moby almost the whole time - mom and dad had to make an early exit from the last house to get to the car to nurse Nick. Sunday Nick met mom and dad's friends, Dana and Chris, for the very first time! Dana and Chris brought Nick some great board books, and they each held him for a little while. Dana made a great salad that everyone enjoyed before dinner.

This week was a very busy week. Monday was a normal day. Tuesday mom picked Nick up from daycare and went straight to moms' night out. Nick was very good, as always, and was even good while another mom held him so mom could eat! Wednesday mom got her hair cut, so dad and Nick were on their own until almost 8 pm. Thursday was La Leche League, so mom and dad at a quick crockpot dinner before meeting Lisa and Donnie at the meeting. Aunt Krystyn and Uncle Zack also arrived Thursday, but not until about 1:30 am (so technically today). Aunt Krystyn woke up early to see Nick before mom and Nick left for daycare. Mom left work early, picked Nick up, then came home to hang out with Aunt Krystyn and Uncle Zack. After dad got home, everyone went to the Box Bar (a restaurant, not a bar) and Nick spent some time being held and in the Moby. They left in time to watch most of the hockey game at home, but mom and Nick fell asleep before the Red Wings lost.

Aunt Krystyn and Uncle Zack are here until Monday morning. We have a fun weekend planned - meeting more Pingles at Brandon's graduation party and celebrating dad's birthday (again!) and Aunt Krystyn's on Sunday. We're celebrating dad's birthday (AGAIN!) and Audrey's on Monday. After that, the week should calm down. Next weekend mom might take Nick to law school to help out with a seminar on Saturday, and Sunday is dad's first Father's Day as a father! Should be fun.

Nick is sleeping better on his own every day, especially the first stretch at night, and is only waking up to nurse once at night most nights. His 0-3 clothes still fit, but they are getting a little snug, and soon I'll have to go up to his room to get all his 3-6 months clothes out. So far what we've seen of his personality resembles his dad - pretty laid back, doesn't complain much, generally happy kind of guy :)
Posted by tejl at 10:40 PM

He's getting so big!!! He looks just like you!