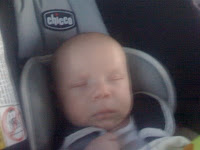 Today Nick is nine weeks old! The big news this week is, of course, Nick started going to daycare. It was far more traumatic for me than it was for him, let me tell you. I cried the whole way there, thinking my little boy would feel abandoned. We arrived and his "teacher" was waiting for us. When I finally handed him to her, he did the OPPOSITE of cry - he gave her a huge grin! This made me a little bit sad - you mean my baby can exist without me?? - but it also made it much easier to leave.

Last Saturday was a big day for Nick. We had our first family photo shoot, which went ok. As any of you readers who are parents probably already know, it is incredibly difficult to "schedule" something with an infant! You never know when he'll be sleeping, hungry, or just plain not in the mood. We did get some cute pictures though! 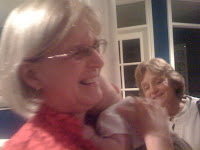 Then it was off to mom's friend Lauren's house - Nick's very first time away from both mom and dad. He did great! Mom and dad, however, were counting the minutes. Then it was off to grammie's surprise birthday party, where Nick was oohed and aaahed over by everyone. Everyone thought he was adorable, and getting big already, and of course he slept the whole time, which amazed everyone. Some future grandmas were able to practice being enamored, and he didn't seem to mind being passed around so much :) Sunday Nick went shopping with mom while dad worked on his website project. And Sunday night mom and dad were busy preparing for mom's return to work and Nick's first day at daycare. 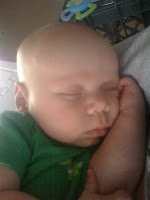 Monday night after daycare mom did not put Nick down - in fact, we didn't even eat dinner! Nothing special happened Tuesday or Wednesday - mom drops Nick off at daycare and calls once or twice (sometimes three times!) a day to check on him, and dad picks him up between 5 and 5:30. Thursday was dad's 30th birthday, so mom and Nick gave him cards and a gift from nick, and they made pizza and cheese bread for dinner at dad's request. 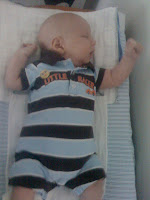 Today Nick had another great day at daycare, and ate a lot! Mom just learned that breastfed babies eat an average of an ounce an hour, so she should be sending 9-10 ounces to daycare - but she has been sending 20 ounces, and wondering why Nick isn't eating it all! Ha! No worries about her milk supply :) After work and daycare, mom and Nick hung out with Lisa. They went to the Livonia La Leche League garage sale, and then out to dinner. Lisa is due with Nick's friend Emily four weeks from Sunday - our little family can't wait to meet Emily!!

Tomorrow I have a Law Alumni Association meeting in Royal Oak in the morning, so Jeff and Nick are on their own for a little while. After that we are either going to a birthday party, the Indian Village home and garden tour, or hanging out at home - we'll see how we all feel. Sunday Nick finally gets to meet Dana and Chris!! This coming week is actually a very busy week for us - Tuesday I am taking Nick to another mom's night out, Wednesday I have a haircut so Nick and Jeff will be on their own in the evening, and Thursday is couple's night at my La Leche League meeting, so Jeff is coming too, and Lisa and Donnie are joining us - Lisa's first meeting :) Friday cannot get here fast enough - Aunt Krystyn and Uncle Zack are coming to visit again!! Saturday Nick gets to meet some more of my family at Brandon's graduation party. And Sunday we'll be hanging out at home, with mostly Aunt Krystyn holding Nick :)

Nick smiles quite often now. He holds his head steadier and steadier every day. He makes a lot of different noises now. He can tolerate more tummy time, and generally can tolerate more time not being held. We are anxiously awaiting his first laugh and hope it happens next weekend when Krystyn and Zack are here! There are some things we are monitoring as well - the cross-eyed thing and also Nick's tear ducts are block a little, so he gets a lot of mucous in his eyes. We have to massage his tear ducts 10 times three times a day - but it should clear up before he's 9 months old.

Today I went to Carter's and bought Nick a bunch of clothes. I bought him some 9 months pajamas and I cannot believe how big he'll be by Christmas!! I also saw some newborn clothes, and when I remembered how well those fit him when he was first born, and saw how tiny they look to me now, I got a little teary - they aren't kidding when they say "they grow up so fast!" I have already moved Nick's headrest to its highest position in his car seat. Just yesterday Jeff was holding Nick in bed in front of him and exclaimed that he remembered when Nick easily fit in that position, and now he's cramped! Our baby is growing up :)
Posted by tejl at 10:14 PM