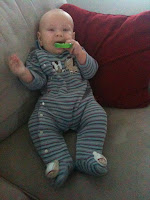 Today Nick is twenty-seven weeks old! He is over his most recent illness and back to his "normal happy active" self, as his daycare teacher put it!

Last weekend we just hibernated in the house. It was great. Nick turned six months old on Saturday - wow, that was a fast six months! Nick took some good long naps and played with us as much as he could, given his condition. He was very congested and still had his fever all weekend. He had difficulty nursing and we kept paying attention to his drool and fontanelles to check for possibly dehydration. On Saturday we gave him a sippy cup of water - we aren't using traditional sippy cups though, just ones with straws, so I'm not sure if he drank any water or just chewed on the straw! We also gave him banana again, but this time in a mesh feeder. He seemed to like it a lot better that way, so we're going to keep giving him new foods in the mesh feeder. It's still self-feeding, so we're ok with it.

Monday it was back to work for mom, but dad worked from home so we could keep Nick home from daycare. Grammie came over to help dad out, and so did Grammie's friend Nancy. Nick had a rough 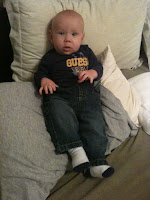 day and dad thinks he missed mom, which made it so hard for her to stay at work! When she got home though he had a huge smile for her, and giggled as she put him into his pajamas. His fever went away on Monday, so Tuesday he went back to daycare. He was still congested but eating better and almost back to his cheerful self. Wednesday he was definitely back to his cheerful self, and eating and sleeping normally again. At daycare he painted a pumpkin and all the babies' pumpkins are on the window as Halloween decorations - so cute! Thursday Nick had another great day - he ate almost all of his bottles at daycare, so we're going to start sending more milk! He's a growing boy!

Tonight is parents' night out at daycare - the daycare teachers stay late and parents can pay $25 for them to watch the kids for a night out. We are taking advantage of this opportunity - it will only be the THIRD time we're away from Nick for an evening! We are probably just going to go to dinner and a movie.

Tomorrow Nick and I are going to some mom to mom sales, and at some point this weekend we plan on taking Nick to the cider mill for the first time. There is a cider mill right here in Northville, and another one in Plymouth - not sure which one we're going to yet.

Monday is Nick's six month well-baby visit - more shots :( That's all we have planned this week!

I have decided to make Nick's Halloween costume and he is going to be an adorable little monkey (minus the white fringe). I'm so excited! My mom made our costumes when we were growing up - Rainbow 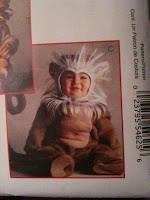 Brite, genies, a witch - and I bought my sewing machine last year with the intention of using it to do the same for my children. Growing up we always trick or treated in Ferndale and Pleasant Ridge. There was one house on Pinecrest that always had hot cider and coffee for the kids and parents - I want to be that house in our neighborhood! I want the kids to say "oh mom, we have to go to that one house where they always have cider and full size candy bars." :) Starting next year we plan to decorate too - one house in our neighborhood has a display that includes what looks like a skeleton crawling out of a grave. Super cool!

I have to spend every minute Nick is sleeping working on his costume to make sure it's ready for Halloween - only 22 days away!
Posted by tejl at 7:36 AM