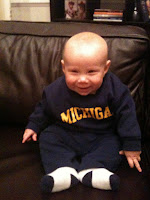 Today Nick is twenty-eight weeks old! He is getting so big. This week his sleep pattern was a little off - not sure if it's a new sleep pattern or if he's still getting back to normal from being sick. We'll see this week!

This week was rough. Jeff was very sick with the flu all week - so it was just me and Nick the whole time, plus I took care of Jeff as much as I could. All I have to say is, I was definitely not cut out to be a single parent! Or at least not a single parent who couldn't afford a nanny. I was exhausted every day. It's crazy how much I took Jeff for granted - I won't anymore!

Saturday we all just hung out at home. Jeff realized he was sick so we tried to keep him away from Nick as much as possible. Sunday Nick and I went out and ran errands while Jeff rested. We went to Block's and bought Halloween decorations. We came home, then went back out and went to a mom to mom sale, Costco, Joann's and Buy Buy Baby. It was rough on Nick - he's not used to having to run errands with me. Usually he stays home with Jeff or all three of us go so one of us can play with Nick while the other does the errand. He made it through though :)

Monday was Nick's 6 month appointment. He is 17 lbs 10 oz and 26.5 inches. The doctor checked to see if he's grabbing at things, asked if he's sitting up, checked his vision and his ears. He has some fluid in his ears but the doctor said that's probably from his illness, it's not an infection. He doctor said his growth has slowed, and that it will be much slower now, from a combination of being breastfed and from his genes. We're ok with 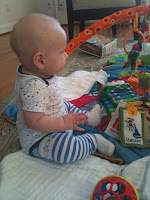 This week is such a blur, I can't really remember anything specific. I dropped Nick off at daycare and picked him up every day. We kept him away from Jeff until this morning so he wouldn't get sick again. Wednesday I went to the Carter's store at lunch with Karen and bought Nick some adorable new clothes - I just love that store!

Today I have a hearing in Grand Rapids, so I was hoping to get home and pick Nick up earlier than usual, but unfortunately I was called at the end of the docket, so Jeff picked him up and I got home at about my usual time.

Of course, the one day I don't pick Nick up from daycare, he got his proofs from his school pictures! They are terrible. I don't know what happened, but he didn't get both backgrounds we picked. There are three poses - he's not smiling in any of them, in one he is sucking in his lips so it looks like he has no mouth and in another he has so much drool on his chin it's ridiculous. The class picture is hilarious - the one teacher looks like she's on crack and the other is not even paying atten 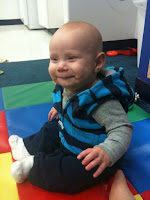 tion to the camera! And school pictures are so much more expensive now than they were when we were growing up. I don't know if we're going to order any of them :(

This weekend we have some fun plans. Tomorrow I'm hoping to go to a thrift store to buy some brown t-shirts to use as the lining for Nick's costume - I don't want to go to Joann's again and this might save some money. Sunday we are hoping to go to the pumpkin patch. There's one right in Northville - Three Cedars Farm. We're excited and hope to turn it into a family tradition! We don't have any scheduled this week, and I hope it stays that way. I need to work on Nick's costume every moment he's asleep!! I'm excited about it though. Even if it doesn't turn out perfectly, it's being made with lots and lots of love!
Posted by tejl at 9:14 PM