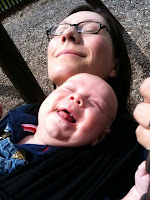 Today Nick is sixteen weeks old! Oh my goodness, Nick - slow down!! You're getting too old! :) Nick had a great week. He is still a little congested but I think that's a little permanent - our pediatrician told us not to do anything with his nose ever unless it affects his sleeping or eating. Nothing affects our baby's sleeping or eating so far! :) He is growing like a weed! We aren't sure exactly how long he is, but we think he's longer than 25" because they have a little measuring mat at daycare and he's longer than that! A baby scale was being offered on Craig's List for only $10 but Jeff said no. Ha!

Last weekend was a fun weekend. Saturday was our first Connection Parenting meeting (more about that in a separate post). Sunday we took Nick to the park for the very first time! We took him to the park where his dad played when he was growing up - behind grandpa and grammie's old house in Plymouth. Mom took him on the swings and down the slides in the Moby. He sat in his car seat in the stroller and strolled around the park perimeter and by the waterscape, where he plans to play a lot over the summers to come. Then we all went to downtown Plymouth, where mom and dad ate some lunch at Panera while Nick napped in the stroller. Mom and dad stopped at a new bakery, 21 Sweets, and bought some delicious baklava.

Monday it was back to work and daycare. Mom bought a Peg Perego reversible handle stroller, some clothes and other items from Craig's List for Nick - Cra 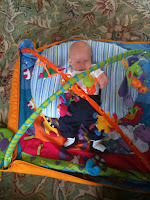 ig's List is the next best thing to mom to mom sales :) Mom also ordered Nick's convertible car seats from www.elitecarseats.com because Sunshine Kids car seats are on sale through Aug. 2 and there were only two left of the kind Nick wanted! Tuesday the car seats were delivered, and Tuesday night mom bought some more clothes and a Tiny Love gymini for Nick from Craig's List. Dad had mentioned finding Nick loving the gymini at daycare - they lay him on the Boppy underneath the gymini, so he can reach the toys. So mom thought he might like one for home too! Wednesday was not a great day - dad was rear ended on his way to pick Nick up, so mom had to pick Nick up while dad dealt with the aftermath of the accident. Luckily he wasn't hurt, and there wasn't a lot of damage done to his car. Thursday mom picked Nick up again because this weekend is MPCon, so dad went to EMU to help set up. There was a 15-19 car accident on eastbound 696, which caused westbound 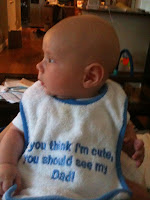 696 to back up too - mom didn't get to Nick until 6:15!! But he was fine, and happy to see her when she arrived. Then mom and Nick went to Buy Buy Baby - Nick needed some more bibs, and mom wanted to buy Nick some toys he can put in his mouth (since he already likes to put everything in his mouth!) and some clothes for Maya, who is due in October. Today mom picked Nick up again because dad is at MPCon. No plans for tonight though!

So this weekend I kind of get to see what it's like to be a single mom! Jeff will be busy at MPCon all day. Tomorrow Nick and I are going to spend some time with Lisa and Emily, and then we have our Connection Parenting meeting, and then Lisa and Cooper might stop by. Sunday we are going to our first messy party!! We are very excited. A messy party is a party where all the parents bring something messy for the kids to play with - we are bringing pudding paint, and some other things people are bringing are bubbles, mud, cooked spaghetti and body paint. Nick will have much more fun at these parties when he's older, but I plan to use the pudding paint to make some foot prints and hand prints for him, and it's always fun to socialize with other moms and kids! 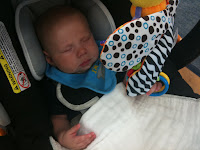 eek not much is happening, but next weekend will be very exciting - Jeff's Uncle John and Aunt Laura and their family get to meet Nick for the very first time! Should be fun!

Nick smiles and laughs his little baby laugh a lot now. Jeff and I crack each other up, trying to get Nick to smile! He can still sleep through anything, thank goodness - but we know those days are numbered. He is so observant, always looking around and taking everything in - just makes us wonder, what is he thinking?? Jeff and I just feel luckier and luckier every day that we have this amazing son, that we get to help him grow up and that we have such a wonderful little family :)
Posted by tejl at 6:25 PM

He's getting so big!!! He's adorable!