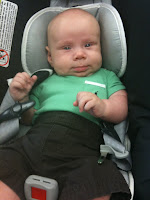 Today Nick is fifteen weeks old! He survived his first cold. We were amazed at how little his demeanor changed while he was sick - he wasn't anymore fussy or cry-y than usual, just coughed a sad cough every once in a while and was congested. He still slept and ate fine, so maybe that's why it didn't affect his sunny disposition very much! Nick is very chatty now and has a definite schedule. He is up for the day between 6 and 6:30. He goes to daycare and then dad picks him up to bring him home and wait for mom. Mom gets home between 5:45 and 6 and Nick wants to nurse as soon as he hears or sees her, which makes her feel pretty good! Sometimes he falls asleep right after nursing, and sometimes he'll stay up a little while, but he is asleep by 7:30 pm 99% of the time. He'll usually wake up to nurse around 10 or 11, again around 1 or 2, and again around 3 or 4. Then it's back up for a new day between 6 and 6:30 again! :) 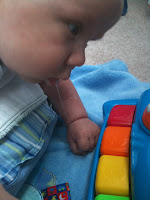 Last weekend mom went to a mom to mom sale and bought Nick a cute piano toy and some clothes and pajamas for this fall. She saw a mom with her little girl in a Moby and stopped to chat. They chatted about the Moby, cloth diapers, modern v. old parenting concepts. Mom really wished she had brought Nick with her! When she got home Nick was ready for a nap, so she nursed him and then hunted around on the Craig's list baby stuff page. She found a video monitor, emailed the seller and then went to pick the monitor and a bag of infant toys up from the seller. She spent the rest of the day playing with Nick's new toys with him. The video monitor is great! 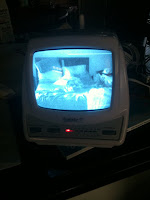 It's not a color screen but it works really well. Mom and dad both feel a lot better about letting Nick sleep on his own now that they have the video monitor. Sunday mom and Nick were up bright and early to get out to Royal Oak for the LAA meeting. Dad was able to sleep in a little - he deserves it! Mom and Nick were at Starbucks for the LAA meeting for about two hours, then they went to Grandma Audrey's for a nice visit. After a couple hours there, they headed home. Mom and Nick took a nap, then while Dad and Uncle Jim were busy putting down mulch, mom took Nick to the grocery store. 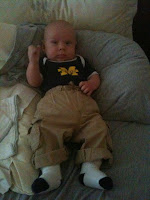 Monday began another day of daycare and work. It was Nick's first day back in five days, so mom was a little nervous about how he would react - but of course he was fine, and smiled a big smile when he saw his teacher! Tuesday Nick seemed a little uncomfortable in his infant seat, and mom started to worry that he was already outgrowing it. A friend suggested she remove some of the padding. Lo and behold, Wednesday he seemed much more comfortable in his seat! Mom took out the body padding but left in the head padding. Today mom stopped in Redford to pick up some more great Craig's list finds - four bigger toys for Nick to play with!

This weekend there aren't many plans. Saturday is our first Connection Parenting tribe meeting - so excited! I can't wait to meet the other parents and start talking about the book. Jeff is not as enthusiastic, but I told him if he doesn't think he's getting anything out of the meetings, he doesn't have to keep going.

This week was tough emotionally for me. I am hypersensitive to stories of abused children now that I have my own child - before I was a mom, I often wondered how an adult could hurt a child, but now I seriously do not understand the mentality of anyone who hurts a child, especially his or her own child. Two articles in the paper this week caught my attention - one about the autopsy of Nevaeh Buchanan, the five year old Monroe girl who was found buried in cement by a river, and whose autopsy revealed she died from suffocation from dirt (so either someone forcefully held her face in dirt or buried her alive - which is worse?) and another about two men who were convicted and will be sentenced for torturing a two year old boy with a blowtorch. Stories such as these make me physically ill. When I think about Nick's little face, and how he looks at me and Jeff with complete trust, and relies on us not only for his happiness but for his very survival, it makes me sad beyond words to realize there are all these little children just like him out there who are being betrayed every day by the adults they were born trusting. The idea of hurting Nick, even on accident, is so incomprehensible to me - I just don't know how people can do that! I cannot imagine looking at Nick's little face or body as I hurt it and being able to go through with causing that hurt - and I don't know how those other adults can either :( I would give almost anything to make sure no child was ever abused again!
Posted by tejl at 10:50 PM