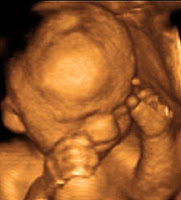 Today Nick is 27 weeks old. Only 91 days to go! Nick is very active, and I can tell he's getting stronger and bigger. His movements are very strong! But they still don't wake me up at night. I am experiencing more back pain, and I definitely have pregnancy congestion, but other than that - no real symptoms. I truly feel lucky to be having such a delightful pregnancy!

According to The Cradle, Nick has grown a 1/2 inch (13 mm) in just 7 days. As Nick gets bigger, I may notice some shortness of breath. As my growing uterus presses on my diaphragm, it becomes harder to fill my lungs and to breathe out completely.

According to Pregnancy Weekly, Nick weighs approximately 2 pounds and measures nearly 14.5 inches from head to heel. His facial features are almost fully developed and synchronizing enough that he may make faces that are visible on an ultrasound. Nick's skin is becoming thicker and fleshier and increasingly wrinkled, thanks to the amniotic fluid. The skin will remain wrinkled for the first month or so after birth - just think about how your hands or feet look after you have been in the water for just 30 minutes! During this week, the brain continues its rapid growth, and the lungs continue to develop.

According to Baby Center, Nick weighs almost 2 pounds (like a head of cauliflower) and is about 14 1/2 inches long with his legs extended. He's sleeping and waking at regular intervals, opening and closing his eyes, and perhaps even sucking his fingers. With more brain tissue developing, Nick's brain is very active now. While his lungs are still immature, they would be capable of functioning — with a lot of medical help — if he were to be born now. I should chalk up any tiny rhythmic movements I may be feeling to a case of baby hiccups, which may be common from now on. Each episode usually lasts only a few moments, and they don't bother Nick, so I should just relax and enjoy the tickle.

We had our first Bradley class this week. Didn't learn anything new yet, but we are just waiting to get to the good stuff. It's a small class of seven couples, including us, taught by an independent instructor at her home. It was a good atmosphere, and the instructor seems very knowledgeable and easy-going. We have nine more weeks of classes, so hopefully she'll teach us what we need to know to have the natural birth we are aiming for!

We scheduled our second 3D/4D ultrasound for February 7. I can't wait to see the changes! Jeff's parents are going to attend, and maybe my mom and Jeff's brother.

We also bought Nick a house! Well, almost - the offer has been accepted, our inspection is scheduled for Saturday, and if all goes well, we'll close on February 11. We are so excited! It's pretty close to being our dream house :) It even has a basketball hoop on the driveway! It is definitely big enough for the family we are planning. Here is a picture of the outside, of the room we'll probably give to Nick, and the big playroom in the finished basement. We plan on putting a media room and our home office in the basement, so it will probably be where our family spends a lot of time :) We are just so relieved to have found a nice house in a safe neighborhood with good schools. We are both sleeping better at night - or we will be, as soon as we move in :) 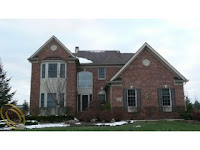 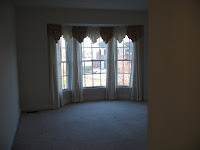 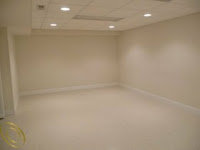