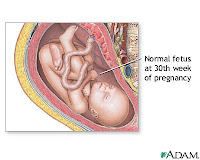 Today Nick is 30 weeks old. Only 70 days to go! The results of my 1 hour glucose test came back normal, so that was a relief. I've been trying some tricks to get Nick to turn but so far I don't think they've worked. I'll keep trying! Right now I'm having some problems with my TMJ issues, so I'm hoping to get that worked out - these last two months are very important for Nick's body and brain growth, so I need to keep eating properly! Nick is SO active and his movements are SO strong - it's amazing to feel and see! Even though I've been feeling him move for two months now, I still smile and stop to pay attention each time he moves. I almost feel bad, like I have him trapped in my body and he's fighting to get out - but it's just not time yet!

According to The Cradle, Nick's toenails may be visible, and a good head of hair is often present by this point. When this day ends, I will have been pregnant for seven complete months. While Nick's growth has been rapid and sustained for many weeks, his growth rate will begin to slow as the date of birth approaches.

According to Pregnancy Weekly, Nick now weighs around 3 pounds and is about 16 inches from head to heel. An ultrasound image may show Nick yawning or even sucking his thumb, and I may also notice that Nick does not move at all during any Braxton Hicks contractions. This is because my muscles tighten and constrict his movement. By now Nick is probably more used to Braxton Hicks than I am (I think I've only had two Braxton Hicks contractions and they were a few weeks ago).

According to Baby Center, Nick's about 15.7 inches long now, and he weighs almost 3 pounds (like a head of cabbage). A pint and a half of amniotic fluid surrounds him, but that volume will decrease as he gets bigger and takes up more room in my uterus. His eyesight continues to develop, though it's not very keen; even after he's born, he'll keep his eyes closed for a good part of the day. When he does open them, he'll respond to changes in light but will have 20/400 vision — which means he can only make out objects a few inches from his face. (Normal adult vision is 20/20.)

We had our fourth Bradley class on Tuesday and this week we watched a movie that featured a home birth, a few hospital births and some birth center births, and talked about the role of the coach. Although Jeff and I disagree on where Nick should be born, we both agree that we want a natural, unmedicated birth for Nick, and we are learning how to work together to achieve that.

We are still hoping to close on the house a week from today, although we have not been able to confirm yet if that is going to happen. No matter what, we still have our 3D/4D ultrasound on February 7 to look forward to! We also think we found a daycare for Nick - it's right by the new house, and it was awesome! It's brand new, it has a ton of enrichment programs in the curriculum, the infant caregivers are required to wear scrubs, they have separate warming dishes for breast milk and formula, they have no problem with using cloth diapers, they don't believe in having televisions anywhere in the center - we pretty much couldn't ask for more, and best of all, it's within what we budgeted for daycare! What a relief :)
Posted by tejl at 6:50 AM