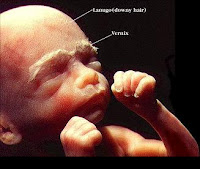 Today Nick is 24 weeks old. Only 112 days to go! We bought a stethoscope to try to hear Nick's heartbeat at home, but so far we've had no luck. We tried again last night and heard nothing - but we both SAW Nick kicking, instead of just feeling it! It was so cool to see the top of my bump move. I am still having a pretty symptom-free pregnancy, although I have to be careful of how I sit or my back starts to hurt. I still haven't had round ligament pains or any other stretching pains, thank goodness! But Nick is definitely growing - I look more pregnant every week :) We are looking forward to our 3D/4D ultrasound, which is a week from tomorrow. We will receive four color photos of Nick, and a DVD. I'll post as much here as I can!

According to The Cradle, between now and Nick's expected date of delivery, his feet will almost double in size, from about 1.8 inches (45 mm) to 3.3 inches (83 cm). At this point, being pregnant is nothing new—it’s become a way of life! If I were still experiencing some stomach upset and nausea, eating an easily digested snack every two hours may help me feel less nauseous (but I never felt nauseous).

According to Pregnancy Weekly, Nick weighs about 1.2 pounds and is just under 12 inches from head to heel. His lungs have started secreting surfactant, the substance that keeps the moist, interior surface of the lungs from sticking together; and he is practicing breathing. Nick's eyes are also watching for light and his ears are listening to my heart beat and my stomach growl.

According to Baby Center, Nick is growing steadily, having gained about 4 ounces since last week. That puts him at just over a pound. Since he's almost a foot long (picture an ear of corn), he cuts a pretty lean figure at this point, but his body is filling out proportionally and he'll soon start to plump up. His brain is also growing quickly now, and his taste buds are continuing to develop. His lungs are developing "branches" of the respiratory "tree" as well as cells that produce surfactant, a substance that will help his air sacs inflate once he hits the outside world. His skin is still thin and translucent, but that will start to change soon.

My midwife said I could start feeling Braxton Hicks contractions any time. She also told me to keep my eye out for signs of pre-term labor. Babies born as early as 27 weeks have a very high chance of survival, but I am working hard to keep baby Nick inside for as close to 40 weeks as possible :) Every day it sinks in a little more that I am going to be a "mother." I have a feeling I hardly know what the word means yet :) We both fully expect every aspect of our lives to change completely - so anything less than 100% change will be a bonus!
Posted by tejl at 6:40 AM

Isn't it cool to see it as well as feel it! I love it! I can't wait to see actual body parts!! Hope you are doing well!