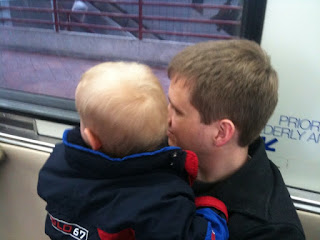 Nick has been OBSESSED with 'choo choos' for months now, so this weekend we had some free time and we decided to take Nick on the People Mover as his first "train ride." He didn't love it as much as we thought he would. He actually started to cry at first but we calmed him down and had an uneventful two loops around the city. The train was always kind of crowded and it was great to see so many people in the D!
Posted by tejl at 9:15 PM