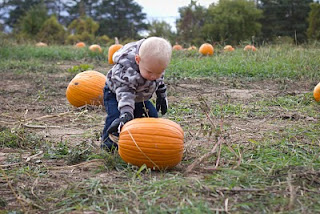 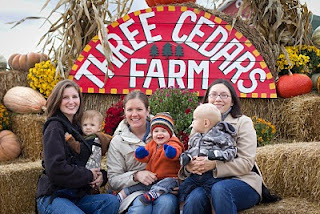 Today Nick and his BFFs went to Three Cedars Farm's pumpkin patch. It was chilly but we had fun! Nick saw the pigs and sheep and chickens, and played in the hay a little. We all took the hay ride out to the pumpkin patch and Nick picked out Jeff's pumpkin :) Then we took the hay ride back in and Nick snacked on some all-natural fruit snacks while Jeff and I snacked on cider and donuts :) We agreed next year he can have a donut - he'll be 2 1/2 years old :) Maybe we'll do the corn maze next year too!