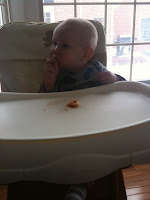 Today Nick is forty-six weeks old! Yikes, I'm getting too close to 52 weeks for comfort :)

Last weekend was fun! Saturday I made a homemade pizza with homemade whole wheat crust, organic sauce and cheese, and green peppers and turkey pepperoni. Nick liked it - he wasn't begging for more, but he ate what we gave him. Saturday night Ms. Amanda came to baby-sit while his dad and I went to a wedding. Nick had a blast with her, as usual, and she left him a cute note on his chalkboard wall. When we arrived home, he was awake - poor Amanda said she accidentally woke him up while checking on him! I nursed him right back to sleep and he was fine. :) Sunday I made homemade pita bread and hummus for 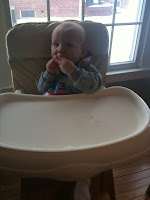 my Daring Kitchen cook's challenge - I have been dying to have Nick try hummus but I wanted to make sure it was homemade, so it wasn't processed. It's a fun way for him to get some protein from chickpeas though. And he liked it! I have to think of other things he can dip in it though - I don't want him to eat very much bread, but he can't have celery yet. That leaves carrots . . .

Monday it was back to work and daycare. This week I tried to be better about dropping Nick off, saying good bye and leaving, without hanging out for 5-25 minutes. Some days I did better than others :( He seems to be sleeping a little better in Infant B. My only issue is, I think they are trying to prevent him from sleeping in the morning so he will sleep longer in the afternoon with the other Infant B kids - he's been napping for an hour or longer each day, but after noon. At home on the weekends, he still take two ve 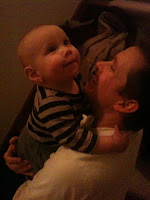 ry long naps. They say he's still happy and active though so maybe I just need to go with it . . . A few times this week Nick didn't nurse right to sleep, he played with us downstairs for a little while. The tough part when that happens though is paying attention to his cues when it is time to go to sleep.

Tonight we had an infant/toddler CPR class at TLE, so Nick stayed in Infant A with some of his classmates while we were in the preschool room, learning how to save him. Pretty much the only thing I learned though is that I hope I never have to give CPR, especially to Nick :( I'm sure I'd fail miserably.

Tomorrow we are going out to Lake Orion to deliver some donated breastmilk, and then we are stopping 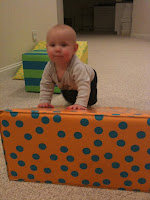 Nothing exciting is going on this week. We are supposed to get a ton of snow - looking forward to spring for many reasons :) Next weekend should be fun - Saturday we have a potluck with our Connection Parenting group and Sunday is Ethan's second birthday party! We're so exciting - Nick and Ryan haven't seen each other since September. It should be fun to see if they do any parallel play :)
Posted by tejl at 10:09 PM