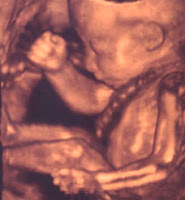 Today Nick is 21 weeks old. Only 133 days to go! I am finally feeling him move. It feels like he's just bumping around in there, although at first it felt like when I lose my stomach on a roller coaster or fast long elevator. It's amazing to finally feel him moving around in there, and my pregnancy books say he is establishing awake and sleep cycles, which I may even start to be able to predict! My weight gain/bump growth has been very gradual, so I'm not having terrible stretching pains or round ligament pains, and I'm not getting stretch marks yet. At least I feel like I finally look pregnant, and not just fat :) And thanks, Becky Simmons, for giving me Ina May's birth book. I'm excited to read it!

According to The Cradle, right now Nick looks like a miniature newborn. His face looks peaceful with closed eyes, nostrils, and a nicely formed mouth. Every once in a while, his thumb or finger will slip into his mouth and he will practice sucking.

According to Pregnancy Weekly, Nick weighs approximately 12 ounces and is about 10.5 inches head to heel. Nick's measurements will be given from head to heel (as opposed to crown to rump) from now on as he is stretching out and an accurate, full-body measurement is easier to take. Nick is busy moving within my uterus, surrounded by amniotic fluid, learning how his arms and legs move, and using his hands to feel his facial features, which I may be able to see on an ultrasound.

According to Baby Center, Nick now weighs about three-quarters of a pound and is approximately 10 1/2 inches long — the length of a carrot. I may soon feel like he's practicing martial arts as his initial fluttering movements turn into full-fledged kicks and nudges. I may also discover a pattern to his activity as I get to know him better. In other developments, Nick's eyebrows and lids are present now.

According to The Bump, Nick gulps down several ounces of amniotic fluid every day, both for hydration and nutrition and to practice swallowing and digesting. And, these days, those taste buds actually work! Studies show that after birth, babies are most interested in tastes they've already experienced through amniotic fluid. Meaning, I should think about what I want Nick to eat as I prepare my own lunch.

Jeff and I are in North Carolina for one more day. We have had a lot of fun, spending time with Nick's Aunt Krystyn and Uncle Zack and their friends here in North Carolina. Krystyn and Zack are coming to Michigan for a week at Christmas, so it's not long until we'll see them again - yay :) Krystyn and I went shopping today on Black Friday - I bought one more pair of maternity jeans and some scrapbooking supplies so I can make a pregnancy scrapbook.
Posted by tejl at 1:40 PM